NBA draft may have deepest talent in years 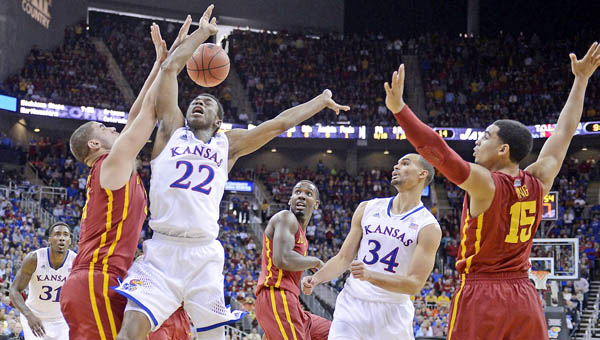 Kansas’ Andrew Wiggins (22) is fouled as he drives to the basket. Wiggins could be the top pick in the NBA draft on Thursday. (MCT Direct Photo)

Local draft handicapper Bart Burcham said this year’s NBA draft might be one of the deepest drafts in years.

The NBA draft will be 7:30 p.m. Thursday (ESPN) and Burcham said there is more to this draft than just Andrew Wiggins and Jabari Parker.

“In this draft, there’s eight or nine who can be pretty good starters and some of them fairly quick. And then there are seven or eight guys at the top I’d really like to have and five or six more that I really like.”

The stress fracture to Kansas center Joel Embiid who was a possible top pick by Cleveland along with Wiggins and Parker, will clear up who the Cavaliers will take with the first pick.

The Cavaliers are now torn between Parker and Wiggins. Regardless of whom the Cavs pick, Burcham said there is plenty of talent to go around for every team.

“With all these guys coming out, those teams in the middle of the draft will get some pretty good guys. As bad as last year’s draft was, this year’s draft is that good,” said Burcham.

1. Cleveland: The GM loves Parker (6-6, G, Duke), but if I was picking, it was no doubt that I’d pick Wiggins. He’s a lock-down defender. Put him and Kyrie Irving together, there will be all kind of guys who will want to play with them. Andrew Wiggins, 6-8, PG, Kansas.

2. Milwaukee: If Cleveland doesn’t take Wiggins, Milwaukee will. Otherwise, it’s Jabari Parker and he can score.

3. Philadelphia: They get hurt the most with Joel Embiid hurt. They would have gotten Wiggins or Parker. If they don’t take Embiid, they take Noah Vonleh, 6-10, F-C, from Indiana. He has an amazing wingspan, he’s a good defensive player and he can go inside and out.

4. Orlando: Donte Exum, 6-6, PG, Australia. Everyone is going crazy over him. All the international guys coming over have played well. The Spurs have eight of them.

5. Utah: They want to trade up to get Parker. They take a chance on Embiid since they can’t get the other three. Joel Embiid, 7-0, C, Kansas.

6. Boston: The Celtics try to take the best player available unless they work a trade for Kevin Love. They take Marcus Smart, 6-4, G, Oklahoma State.

10. Philadelphia: This could be a bunch of different players. They want a shooter and they take Doug McDermott, 6-8, F, Creighton.

11. Denver: This could be a foreign player, but they need a shooting guard so they take Gary Harris, 6-4, G, Michigan State.

12. Orlando: If they get a guard with the first pick, they go for Adreian Payne, 6-10, F. Michigan State. He’s not Tim Duncan, but he’s like Duncan.

13. Minnesota: Coach Flip Saunders is not in love with Ricky Rubio, so they take Elfrid Payton, 6-4, PG, Louisiana-Lafayette.

15. Atlanta: This will be a wing player. There are several possibilities, but I have them taking Kyle Anderson, 6-9, F, UCLA. He needs some weight, but he has guard skills.

21. Oklahoma City: Jordan Adams, 6-5, G, UCLA. They need a good two spot. He’s a pretty good scorer and he’s solid. He can come in and help right away.

24. Charlotte: They took a shooter, so they want a backup point guard who can shoot. They take Shabazz Napier, 6-1, PG, Connecticut.

25. Houston: They want the best player they can get. They add P.J. Hairston, 6-5, SG, North Carolina. He was declaered ineligible academically and ended up in the NBADL, but he can shoot.

26. Miami: They like Jarnell Stokes, 6-8, F, Tennessee. He was a double-double machine. He can flat rebound and Miami doesn’t have anyone but LeBron who rebounds.

27. Phoenix: Someone will take this guy in the first round. I think the Suns go with Mitch McGary, 6-10, PF, Michigan. He tested positive for marijuana during the NCAA tournament and was ruled ineligible for next season, so he opted for the draft.

29. Oklahoma City: They take another G-F combo, K.J McDaniel, 6-6, SF, Clemson. He’s athletic, he can knock down shots and he’s a great defender.

30 San Antonio: Bogdan Doganovic, 6-6, SG, Serbia. He can handle the ball. He’s slashing guard from the wing. He sounds like Manu Ginobili and every other Spurs player but Duncan and Parker.