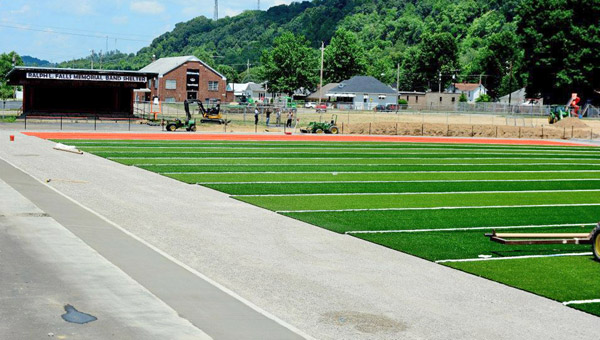 It’s a page out of Dr. Jekyl and Mr. Hyde. The transformation is nearly complete.

The change from a dirt and natural grass surface that has been the home of Ironton Fighting Tigers for more than 100 years will soon be an artificial carpet known as field turf.

Workers began last Monday plowing up the grass and dirt to make way for gravel, sand and carpet. The turf has been laid from end zone to end zone as well as the visitors’ sideline. The rubber pellets must still be added.

The home sideline will be completed within a week. The hash marks, yard-line markers and other emblems such as the tiger and “Bob Lutz Field” will be glued onto the field turf material.

The turf project was privately funded — mostly by individuals — and included a matching grant.

SAN FRANCISCO (AP) — Jay Bruce needed time to recover from his knee surgery in May. Since June rolled around,... read more