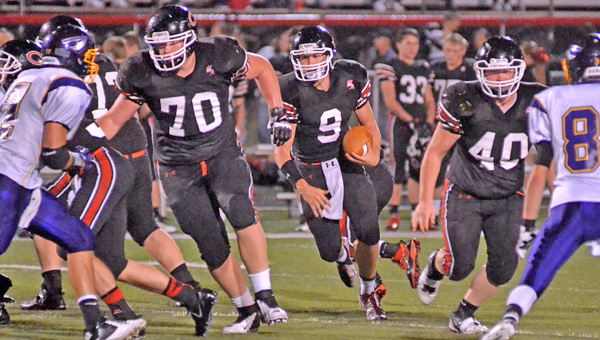 COAL GROVE — The operative word for Austen Pleasants seemed to be “close.”

It was that thought of closeness that led the Coal Grove Hornets senior lineman to give a verbal commitment to play football at Ohio University in 2015.

“I saw how close the team was and how much of a family they were. It has a small town feel. The school is real nice,” said Pleasants.

“(The Ohio coaches) said that physically I’m close to their players. If I go up there, I probably wouldn’t start the first year but I’d be competing to get in and out. They had a senior last year who got hurt and he can’t play this year. They’ve only recruited one other lineman, so if everything works out I should be competing for that first spot.”

Cincinnati, Toledo and Akron have all been calling, but Pleasants is virtually locked into his Ohio commitment with one exception.

“Let’s put it this way. If Ohio State doesn’t come knocking, I’m going (to Ohio),” said Pleasants. “I really do see myself there next fall.”

Pleasants is also excited for the opportunity to play for veteran head coach Frank Solich.

“I’m excited to go up there and play for him. Solich has done a great job,” said Pleasants. “I feel in real good about my decision. They brought in a new line coach this year Dave Johnson who has been at Georgia. I really liked him and I’ve got to know him real well.”

The 6-foot-7, 300-pound Pleasants was the team’s top lineman and earned All-Ohio honors for the second straight year. He was special mention as a sophomore, too. He was first team on the Southeast Division VI All-District team the past two seasons.

“God has blessed Austen with great size, strength and agility. We are very proud of him and excited for him to continue his career at the collegiate level. It’s a tremendous honor for Austen, his family, our football program, our school and our community.”

Ohio finished 7-6 last season including a berth in the Beef ‘O’ Brady Bowl. The Bobcats lost 37-20 to East Carolina.

It marked the Bobcats have reached a postseason bowl five straight seasons under head coach Frank Solich. Ohio played Northern Illinois for the Mid-American Conference championship in 2011 when they lost 23-20 to Northern Illinois.

“Coach Solich and his staff have done a great job at Ohio. It will be a great opportunity for Austen to continue to grow and develop as a player,” said Lucas.

Austen is the son of Jennifer Pleasants of Coal Grove.