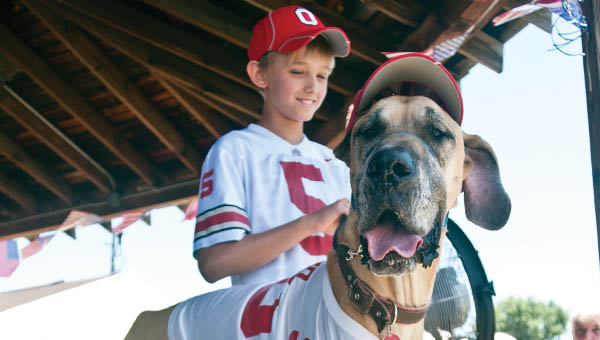 Austin Webb and his Great Dane, Charlie, participated in the owner-dog look-alike contest.

SOUTH POINT — The goal of local civic organization The People for the Point’s inaugural Party at the Park event on Saturday in South Point was getting the community involved in the community.

“We expected it to be good, but it’s been great,” Chris Smith, member of People for the Point, said. “The weather is perfect and we have heard only good things about everything from the 5K to the car show.”

The all-day celebration began at 8:30 a.m. at South Point Park with a 5K race called the Red, White and Blue Powder run where racers were hit with a mix of red and blue powder during the race.

“(The People for the Point) took the initiative to start this event,” Smith said. “As long as we keep the volunteers we have and maintain the full group effort we will keep having this event.”

Showing off local businesses, talent and cars are some of the reasons behind The Party at the Park, Smith said, and aside from the lack of parking there had been no major issues as of Saturday afternoon but Smith said parking is something the group will address in the future.

“All the vendors are pleased, the bands have been wonderful and the dog show turned out great,” Smith said. “We are really looking forward to our hot dog eating contest.”

The Most Patriotic Dog Show and the hot dog eating contest are things Smith said make Party at the Park offer something a little different.

“People are already asking to volunteer next year,” Smith said.

At 10 p.m. a 12-minute-long firework show marked the event’s conclusion.