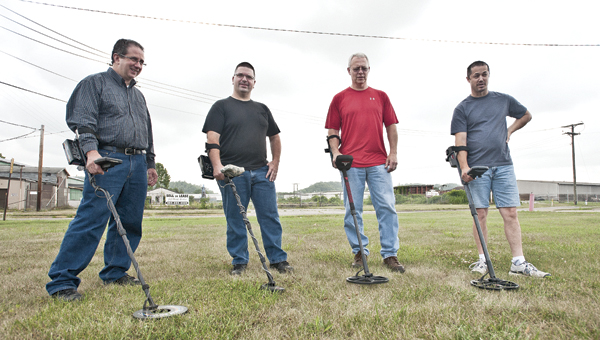 Jim Curley, Gleo Runyon, Dan Johnson, Shawn Upchurch are current Ironton treasure hunters who have taken to the grounds where the former Ironton pool once had been. Their findings include a horseshoe, jewelry, antique monies and much more.

It has been said there is as much money in the ground as there is in circulation in the United States. If that is true, a group of “dirt diggers” from Lawrence County wouldn’t mind if they found every last cent of it.

It’s all about the treasure for this group of metal detectors; but for all intents and purposes, it’s about the hunt and the history for said treasures.

The men are from all walks of life — preachers to police officers — with one common goal: Find the treasures hidden in the dirt and dig them up.

This particular area of interest is a storied place. It was once a fairground, a Civil War Camp, a horse racing track and, of course, was and still is a football field.

If experience is a factor in determining a title, Ironton Police Chief Dan Johnson, (43 years) is the dean of this four-man group. In the spirit of experience equating to title, preacher Jim Curley (three months) is the rookie. In between the dean and the rookie are Coal Grove police officer Gleo Runyon (22 years) and Proctorville resident Shawn Upchurch (four years).

No sooner than the backhoes and bulldozers started digging up the football field at Tanks Memorial Stadium in preparation for the installation of field turf, Johnson, Runyon, Upchurch and Curley grabbed their metal detectors and began combing the acre of dirt left disturbed by the project.

“There’s two feet of dirt out there,” Johnson said. “If we could go down 12 more inches it would be like a fresh start.”

The group has accumulated an array of finds whether it be new coins, old coins, buttons, jewelry, pieces of pocket watches, bullet casings, round ball bullets and other valuable, if at not least interesting, finds.

One of the more sought-after finds is newcomer Curley’s 1870s Carson City dime. The Carson City, Nev., Mint struck nearly 21 million dimes between 1871 and 1878. In terms of quantity, this was by far the highest number of pieces of any denomination produced in Carson City.

“My 5-year-old son found a horseshoe,” Johnson said. “During the 1880s that area was a horse racing track. It’s rusted and broken in half, but it is a horseshoe.”

The collective opinion of the group is the shell casings, of which all four men had several and many of different sizes, were discharged from the starting gun during the area’s race track era.

Runyon said his prize find is a 1860s Shield nickel. The Shield nickel was the first United States five-cent piece to be made out of copper-nickel, the same alloy of which American nickels are struck today. Designed by James B. Longacre, the coin was issued from 1866 until 1883, when it was replaced by the Liberty Head nickel. The coin takes its name from the motif on its obverse, and was the first five-cent coin referred to as a nickel.

“The Shield nickel was the first nickel ever used,” he said. “Before this nickel it was called a half-dime.”

Also found in the field is a trumpet valve inlaid with Mother of Pearl along with other marching band remnants as well as a Duraglass bottle etched with measurements.

“It’s not normal to find all this kind of stuff in one spot,” Runyon said. “Some people scour entire towns and don’t find what we have already found.”

There were a dozen or so other people, Johnson said, who detected the area and yielded as many finds as Johnson, Runyon, Upchurch and Curley.

All total, the four-man group uncovered 600 artifacts from the field. For Curley, however, he said at one point he was beginning to wonder if he was the subject of a practical joke.

“Everyone around me kept finding silver,” he said. “I thought to myself ‘You have got to be kidding me. Surely I will find something at least similar.’”

The group collectively agreed that dedication in metal detecting is as important as experience. When Curley arrived at the field before daylight with a flashlight and uncovered a seated dime, he exploded in celebration.

“The funny thing about that is the battery in my flashlight died,” Curley said. “When I found the seated dime it was pitch black.”

“In my 43 years of metal detecting,” he said, “I have found only one seated dime.”

Johnson admits he would like to find some Ironton Tanks mementos and Runyon knows there is a plethora of things the group just can’t get to. But the thrill and enticement of the hunt will keep them going back.

“We will always remember being down there doing this,” Runyon said. “To find what we found in a field like this is truly extraordinary.”

Even with their finds the “dirt fishers” refuse to think the journey is close to ending.

“There are parts of that ball field that have never been touched,” Upchurch said. “It’s unbelievable.”

Runyon said the construction workers have been a big help in the endeavor and Johnson said Ironton Schools Superintendent Dean Nance has also aided in the effort.

“The construction workers told us when they first started to dig up the field they could see coins laying on top of the dirt,” he said. “The workers have been good to us.”

Upon hearing six loads of dirt from the turf project were hauled to the Ironton Middle and Elementary schools the group soon went to area where the dirt was still in piles.

“Being a rookie is still paying off for Jim (Curley),” Johnson said. “The first piece of the pile of dirt he came to he found a silver coin.”

DAYTON (AP) — An Ohio Department of Taxation report finds that since 2012 the amount of tax credits granted businesses... read more