Foundations of a community lost 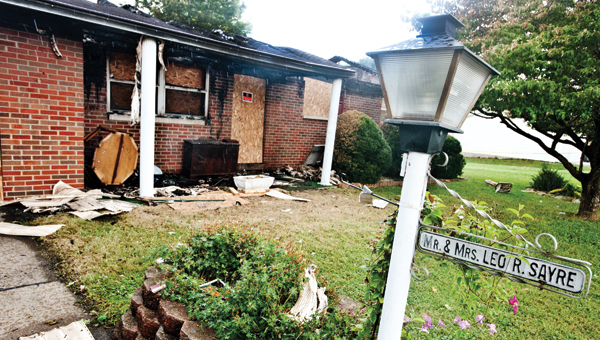 A sign depicting homeowners Mr. and Mrs. Leo R. Sayre hangs untouched while the home sits in ruins following a fire over the Fourth of July weekend.

The cause of the blaze that claimed the lives of Leo and Betty Sayre remains unconfirmed, but what is becoming clear is the type of people the Sayres were; those who knew the Sayres say their deaths will leave a void in the community.

“I knew them because I went to school with their daughter,” Mike Boster Lawrence County EMS director said. “I lived in that neighborhood. It was my playground as a child. The Sayres were kind and sweet people. It’s hard to see the foundations of a community be lost. It is just tragic to lose such great people.”

The Sayres were also longtime members of the New Hope United Methodist Church where they took part in many activities that provided services to the community. Lawrence County Treasurer Stephen Burcham is also a member of New Hope UMC and said he considers Leo a hero.

“In my book Leo is a hero,” Burcham said. “He came out of the house to see what was going on, found out it was on fire and then went back into the home to save his wife. He went back in without any thought for his safety. That’s a hero.”

Leo was also known to have an affection for classic cars.

“I know he loved old cars,” Burcham said. “He had an old car that he’d get out on sunny days and drive around Proctorville. It looked immaculate.”

Proctorville Mayor Rick Dunfee also knew the Sayres, having worked with Betty at Superior Oldsmobile in Huntington and he frequently had morning chats with Leo at the Proctorville McDonald’s.

“Leo was a real likable person,” Dunfee said. “They were just all around good people.”

It is believed the fire was started due to the hot embers from illegal fireworks set off in the area and falling on the Sayre’s home. While the state fire marshal’s office couldn’t confirm a definitive cause, public information director Lindsey Burnworth did say that fireworks were the probable source.

If illegal fireworks do turn out to be the cause, it only makes the tragedy harder to comprehend for Boster.

“It is just senseless and avoidable,” Boster said of deaths caused by the illegal pyrotechnics. “One of the biggest challenges for first responders is the use of illegal fireworks. People buy these things and then have no forethought of the consequences or safety hazards. They are not toys. They are devices that explode and make fire. We don’t have the resources to curb the usage completely but common sense would go a long way.”

The death of the Sayres also serves as a reminder of another fatal fire with ties to fireworks in eastern Lawrence County. In 1996 a blaze at a fireworks store in Scottown left nine people dead. Boster remembers that fire as well.

“I’ve worked in emergency services for a long time,” he said. “If you look at Scottown before and after you will see a big change in legislation regarding fireworks in the State of Ohio. It was a needed change, but it is also why I’m a big proponent of professional shows and even with those sometimes you’ll still see deaths and injuries but the risk is certainly reduced.”