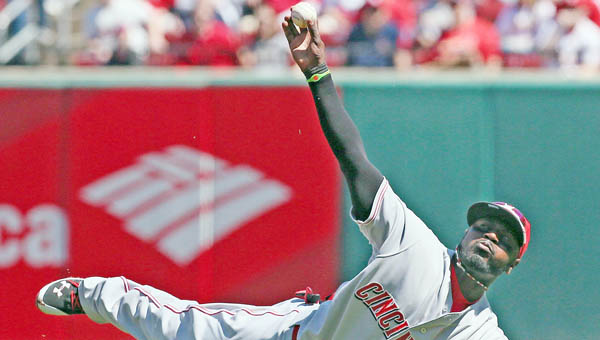 Cincinnati Reds’ second baseman Brandon Phillips will have surgery Friday to repair torn tendons in his thumb. He is expected to miss up to six weeks. (MCT Direct Photos)

CINCINNATI (AP) — Cincinnati Reds second baseman Brandon Phillips is expected to miss six weeks after he has surgery on Friday to repair torn ligaments in his left thumb.

Phillips injured his thumb diving for a ground ball in the eighth inning Wednesday night and an MRI on Thursday morning revealed torn ligaments. The four-time Gold Glove winner is hitting 272 with seven homers and 40 RBIs in 86 game.

“It is a big blow. Brandon is a big two-way player. He has hit in the middle of the order most of the year. Defensively, he has been spectacular. It is a blow, but we’ll weather it,” Reds manager Bryan Price said.

Phillips, 32, was moved down one spot to third in the batting order when Joey Votto missed 15 days earlier in May.

The Reds purchased the contract of infielder Kristopher Negron from Triple-A Louisville on Thursday, before they got the results of Phillips’ MRI.

“We’ll use Ramon Santiago there,” Price said of second base. “Skip Schumaker will play there and all over the place.”

The team placed Votto on the disabled list earlier in the week with soreness in his left thigh.

The Reds’ 37 errors are the fewest in the major leagues. Phillips made just one error in 378 total chances, fifth in the National League.

Zack Cozart, the Reds’ shortstop, will be affected most by Phillips’ absence.

“It is going to be tough for our team,” Cozart said. “Brandon and I work well together up the middle. Injuries happen. Joey’s (Votto) hurt. We have to figure out a way to win.”

CINCINNATI (AP) — The Cincinnati Reds had a five-game winning streak snapped and that was just the start of the... read more