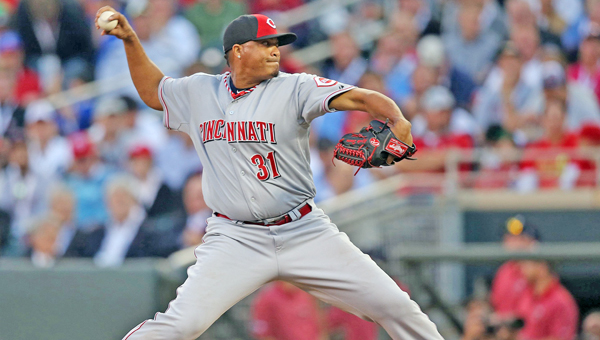 MINNEAPOLIS (AP) — Clayton Kershaw did his part with a perfect inning. Jonathan Lucroy pitched in two RBI doubles. Craig Kimbrel struck out the side in the seventh.

The National League, for all that pitching prowess, lost a second straight All-Star game. That means the American League will again have the home-field advantage again when the World Series arrives in three months.

With an RBI triple by MVP Mike Trout and a two-run home run by Miguel Cabrera in the first inning against Adam Wainwright, the AL topped the NL 5-3 on Tuesday night.

Wainwright, the St. Louis ace, was picked to start the game by his manager, Mike Matheny. Had the boss been anyone else, Kershaw likely would have had the honor. The Dodgers stalwart with the 1.78 ERA and 126 strikeouts in 14 starts took over for the second inning and kept the NL in it after Lucroy cut the lead to 3-2 in the bottom of the first with the first of his big hits.

The Milwaukee catcher, inserted in the starting lineup for the injured Yadier Molina, hit another run-scoring double in the fourth to tie the game at 3.

But Cardinals reliever Pat Neshek, pitching in the place he grew up, gave up two runs in the fifth to let the AL pull ahead for good.

Brewers closer Francisco Rodriguez and Kimbrel, Atlanta’s rock at the back of the bullpen, turned in hitless innings to keep the NL close. But the AL’s late-game relievers were every bit as stingy.

So for All-Stars from teams like the Braves, Brewers, Cardinals and Dodgers, currently four of the top five teams in the league, they are stuck with the fact that they will have to play a Game 7 on the road should they make it all the way through the postseason and into a decisive game for the title.

That does make a difference.

Of the last 28 champions, 23 started the World Series at home, including the last five straight. Since Major League Baseball decided to award home-field advantage to the league that won the All-Star game, the AL is 9-3. The AL has won four of the last six World Series.

“Hey, that’s what it is. We’ll get there first, and then we’ll worry about it,” he said.

Dodgers outfielder Yasiel Puig, who had a tough couple of days getting shut out in the home run derby Monday and then striking out three times Tuesday, felt the same way Lucroy does.

“Doesn’t really matter. Start at home, start on the road,” Puig said through an interpreter. “You’ve got to be a good enough team, obviously, either way. It’s really the same thing to me. If we get there, I think we’ll be fine.”

Despite riding a slump into the All-Star break that left them only one game ahead of the Cardinals in the AL Central, the Brewers had a lot to be proud of with their first half. Lucroy, Carlos Gomez and Aramis Ramirez comprised one-third of the NL lineup. Rodriguez represented the pitching staff. Ramirez went 2 for 3 with a run and a double.

Gomez, asked if the Brewers would be able to build off this in the second half, wasn’t ready to think about resuming the pennant race.

“I don’t know about you, but I’m going to Wisconsin Dells and enjoy the last two days with my kids and take a rest and swim a little bit,” he said.

Selig may have role for Rose at next ASG

MINNEAPOLIS (AP) — Pete Rose may have a role to play in next year’s All-Star game in Cincinnati despite his... read more