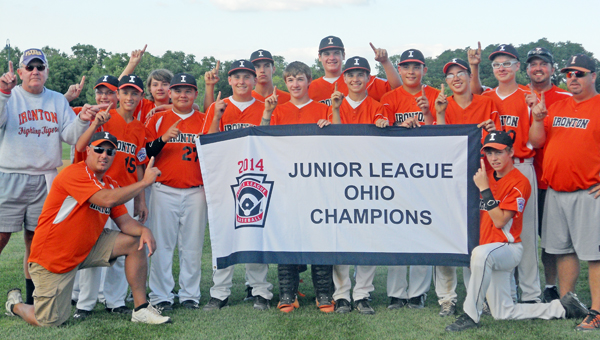 OXFORD — The Ironton Junior League All-Stars have had a nice tournament run.

And it’s not over yet.

Ironton’s Junior League won the state championship on Thursday and now heads for the regional tournament in Fort Wayne, Ind., beginning on Friday.

If Ironton wins the regional they earn a trip to the Junior League World Series.

The Ironton “Flying Tigers” — a nickname coined by coach Lou Mains referring to the combination of Ironton and St. Joseph players — opened with a 17-1 spanking of Olentangy on Saturday and came back on Sunday to beat host Miami 4-1. Next came a 3-2 win over East Holmes in eight innings on Tuesday to put Ironton in the championship bracket.

On Thursday, Ironton faced consolation bracket champion East Holmes and not only won the game 5-4 but the state championship and a berth in the regionals.

Ironton opens against the Indiana state champion at 3 p.m., then plays North Dakota at 1 p.m. on Saturday and Kentucky at 1 p.m. on Monday.

Ironton reached the state tournament by winning the District 11 championship coming out of the consolation bracket.

Ironton rolled to an 18-0 win in five innings behind a no-hitter by Garrett Carrico who struck out every batter for the 15 outs. He threw just 66 pitches and walked one.

Ironton lost 5-0 to Wheelersburg in the next game and dropped into the consolation or loser’s bracket.

But Ironton responded by beat Portsmouth 13-3, Rock Hill 7-5 and Lucasville Valley 10-0 to reached the championship series and a rematch against Wheelersburg.