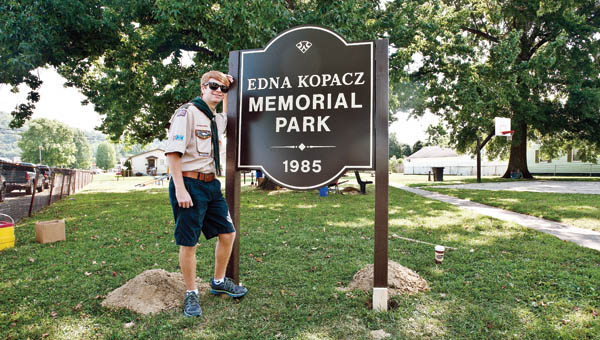 Andrew David McCown stands in front of the newly erected park sign at the Edna Kopacz Memorial Park on Saturday.

At 9 a.m. on Saturday Andrew McCown went to work.

McCown, 16, is a member of Boy Scout Troop 106 and in an attempt to become an Eagle Scout decided to improve Edna Kopacz Park at 2621 S. Eighth St. in Ironton. He chose the park for his Eagle Service Project because Kopacz was the foster mother of his grandfather’s sister-in law.

Installation of benches and a sign as well as fresh paint for the equipment and the fence surrounding the park were all included in the project.

“The concrete is drying, the sign is up and all the equipment is painted safety blue,” McCown said. “The last thing we have to do is paint the surrounding fence.”

McCown has been involved in scouting for six years and he had no shortage of help with the project on Saturday as nearly 20 people – friends, family and other scouts – lent a hand toward his efforts.

“I just thought it would be something really nice to do,” he said. “In some of the other Eagle projects people just put up one sign or put in just one bench. So I thought I’d do a little bit of everything in one place.”

The project requires prior approval from his counselor, scoutmaster and a member of the Eagle board. Once the project is completed he will go before the Eagle board to find out if he has earned the title of Eagle Scout.

“In about a month I will have to go before the board and talk about the project and how it helped and benefitted the community,” he said. “They will ask me about my experience in scouting and sign off on it.”

McCown plans to upgrade the park’s landscaping in the near future.

PROCTORVILLE — For the fifth-consecutive year the Challenger Sports Soccer Camp is coming to Lawrence County. For a whole week... read more