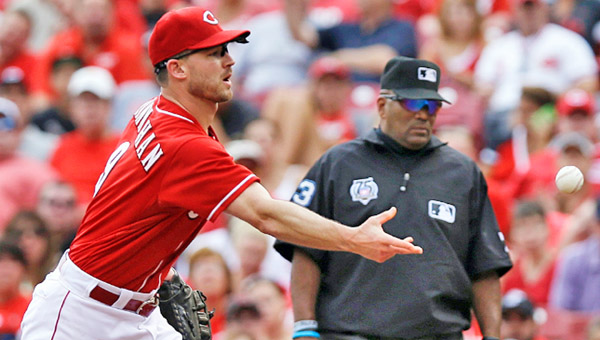 Just activated first baseman Jack Hannahan (left) flips the ball to pitcher Mat Latos who covers first base to record a putout in the fourth ininng of Sunday’s game. The Reds lost 4-2. (Courtesy of The Cincinnati Reds.com)

CINCINNATI (AP) — Mat Latos let one bad inning get to him.

The Reds’ starter allowed no hits through the first four innings before Danny Espinosa led off the fifth with a clean single. Fister sacrificed Espinosa to second with one out and Latos walked Denard Span and hit Anthony Rendon to load the bases. Jayson Werth walked to drive in a run after falling behind 0-2 and LaRoche followed with a two-run single for a 3-0 lead.

Washington went on to win the game 4-2 on Sunday.

Latos and plate umpire Toby Basner exchanged words as the Reds left the field after the inning.

“I started to pitch (poorly),” Latos said. “I let a couple of things get to me that shouldn’t have. The walk to Werth was what bothered me. There were some pitches that were close. (Basner) was inconsistent behind the dish. I gave too much credit to some of their hitters. I hung a curve on an 0-2 pitch to a .200 hitter. Then the whole inning went (badly). That’s what you get when you pitch (poorly).”

It was a 1-2 pitch that frustrated Latos. Instead of an inning ending strike out Basner ruled that it missed the strike zone.

“There were close pitches to Werth that were not strikes but were close,” manager Bryan Price said. “Baseball is a game you in which you have to endure.”

Doug Fister took advantage of facing the slumping Cincinnati Reds to extend the best season-opening start by any Washington pitcher in a Nationals’ win Sunday.

Fister (10-2) allowed just three hits with one walk and five strikeouts in seven shutout innings to reach 10 wins in 14 starts, one fewer than any previous Washington pitcher. Gio Gonzalez reached 10 wins in 15 starts in 2012, and Jordan Zimmermann duplicated him last season. The Nationals moved to Washington from Montreal in 2005.

Adam LaRoche drove in two runs and Anthony Rendon added an RBI single in the ninth to help send the Reds to their eighth loss in nine games since the All-Star break. They are hitting .178 (50-for-281) in that span.

Devin Mesoraco’s two-run double in the ninth off Rafael Soriano allowed the Reds to avoid their 11th shutout loss. Soriano regrouped to get the final three outs for his 200th career save.

The teams went the entire three-game series without hitting a home run, the first time in the 12-year history of Great American Ball Park that three consecutive games have been played without a home run. The Reds and Nationals combined to hit just two home runs in their six games this season — one by each team.

“What it comes down to is we didn’t score many runs,” Price said. “We have to get better at that. Guys are trying but aren’t getting anything out of their effort. You can’t wait until the ninth inning. We have to get more runners on base.”

Latos (2-3), in his eighth start after opening the season on the disabled list with elbow and knee problems, lasted six innings, giving up three hits and three runs with four walks and a season-high six strikeouts.

Notes: The Reds activated 1B Jack Hannahan from the 60-day disabled list before the game and optioned RHP Curtis Partch to Triple-A Louisville. Hannahan had missed the entire season following offseason shoulder surgery in October. … The start of the game was delayed 16 minutes by rain. … The Nationals are scheduled to open a four-game series in Miami on Monday. Jordan Zimmermann is Washington’s scheduled starting pitcher. The Nationals have won seven straight of his starts against the Marlins. … The Reds are scheduled to open a three-game series against Arizona in Cincinnati. The Diamondbacks are the only National League Reds scheduled starter Homer Bailey hasn’t beaten.

Dalton gets applause as QB…for now

CINCINNATI (AP) — Andy Dalton and the rest of the Bengals took the field for their first training camp practice,... read more