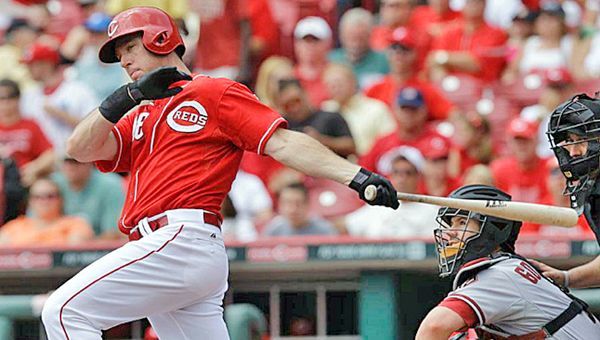 Cincinnati Reds’ outfielder Ryan Ludwick doubles in the fourth inning of Wednesday’s game against Arizona. The Reds lost 5-4 to the Diamondbacks. (Courtesy of the Cincinnati Reds.com)

CINCINNATI (AP) — Alfredo Simon hasn’t won a game since his first All-Star selection. The rest of the Reds aren’t doing much better, either.

Paul Goldschmidt hit a two-run homer that kept Simon winless since the All-Star game, and the Arizona Diamondbacks held on to beat Cincinnati 5-4 on Wednesday, taking a series between two teams struggling to score runs.

Goldschmidt’s 19th homer off Simon (12-6) gave the Diamondbacks two of three in the series. Simon has gone 0-3 since his first All-Star selection. Didi Gregorius added a two-run homer in the ninth.

“A lot of guys are struggling right now,” Simon said.

Most of them on offense.

The Reds fell to 2-10 since the All-Star break. Devin Mesoraco’s three-run homer in the ninth off Addison Reed ended a streak of 11 straight games with three runs or fewer, Cincinnati’s longest such stretch of futility since 1967.

“You certainly feel like the game got away from us, just far enough for us to not be able to come back and win it,” manager Bryan Price said.

Left-hander Wade Miley (7-7) gave up seven hits and four walks in 6 2-3 innings, improving to 4-1 in his past five starts. Ryan Ludwick had RBI double in the eighth off Brad Ziegler. Reed came on with two aboard and got the last two outs and gave up Mesoraco’s homer before getting his 26th save in 31 chances.

Neither team did much on offense throughout the series, which opened with Arizona’s 2-1 win in 15 innings on Monday. The Reds won the second game 3-0, leaving Arizona with a stretch of only one run in 20 innings.

Both teams wasted chances for early rallies throughout the series. The Reds did it again on Wednesday, when Chris Heisey was thrown out at second while trying to stretch a hit with none out in the third. Ramon Santiago was caught trying to steal third later in the inning.

“Heisey was being aggressive,” Price said. “I’m not going to fault him for that. We had a sign mix-up with Santiago stealing third. We wouldn’t want him stealing there. He thought he was doing what we wanted him to do.”

Reds: Cincinnati plays four games at Miami starting Thursday, with Johnny Cueto (11-6) making his first start against the Marlins since 2012. Tom Koehler (7-7) starts for Miami. … The Reds have won their past five games against the Marlins.

Diamondbacks: INF Cliff Pennington, on the DL with a sprained left thumb, is 7 for 12 in three games on a rehab assignment.

Reds: Right-handed reliever Logan Ondrusek, on the 15-day DL with a sore pitching shoulder, threw without a problem for a second straight day. He’s not ready to get back on the mound yet. He went on the DL on July 22. … Slumping CF Billy Hamilton was out of the starting lineup, getting rest. He pinch-hit in the ninth and singled, leaving him 2 for 20.

Both teams were curious about whether their front offices would make a deal with Thursday’s deadline for non-waiver deals approaching. The Diamondbacks have several players who could be attractive to contenders. The Reds were looking to upgrade their lineup. “I think we’re looking to get better,” Price said. “I don’t think there’s any question about that. I don’t see us as a team looking to 2015.”

THAT’S A LOT OF NUMBERS

Cincinnati’s Kristopher Negron got caught in an extended rundown between second and third when Ramon Santiago grounded back to Miley in the seventh inning. The putout was scored 1-5-6-4-1-6-4.

Kirk Gibson’s 337th victory as the Diamondbacks manager ties Bob Melvin for most in franchise history.

It’s the first time Arizona has won a series at Great American Ball Park since 2011. … The Diamondbacks won their first road series since June 27-29 at San Diego. … Simon struck out two, giving him a career-high 84 for the season. He fanned 83 with Baltimore in 2011, the last time he was a starter.