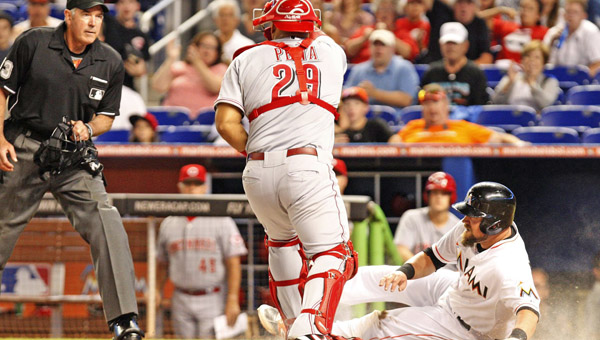 The Miami Marlins’ Casey McGehee is tagged out by Cincinnati Reds catcher Brayan Pena at home plate in the first inning at Marlins Park in Miami on Thursday. The Reds rallied to beat the Marlins 3-1. (MCT Direct Photo)

MIAMI (AP) — The Cincinnati Reds got the pitching they needed at the start and the finish.

Starter Johnny Cueto (12-6) struck out nine and allowed one run in seven innings and Aroldis Chapman pitched the ninth for his 24th save as the Reds beat the Miami Marlins 3-1 on Thursday night.

“Hopefully things will turn around,” Cueto said as the Reds won for just the third time in their last 13 games.

The Reds were the beneficiaries of a controversial call in the eighth inning and they took full advantage of the play.

A long delay in the eighth inning resulted in a run scored by Zack Cozart to tie the game after he was initially ruled out by home plate umpire Mike Winters on a play at the plate.

With the inning extended, Ryan Ludwick delivered a two-run single for a 3-1 lead,

“I really felt that they got the call right,” Reds manager Bryan Price said. “I think that the controversy is that the rule is coming up against a lot of criticism.”

With the Marlins leading 1-0 in the top of the eighth, the Reds loaded the bases with one out. Bryan Morris got Todd Frazier to fly out to right fielder Giancarlo Stanton whose throw to the plate easily beat Cozart for what appeared to be the final out of the inning when catcher Jeff Mathis tagged out Cozart, who trotted in without a slide.

“I really didn’t know what to do because he was in front of the plate,” Cozart said.

“It was kind of an awkward thing not being able to slide. I had a good idea that the call was going to be overturned.”

After a 6-minute, 10-second instant replay review, the call was overturned because Mathis was ruled to be blocking the plate and Cozart was called safe tying the game 1-1.

Marlins manager Mike Redmond was immediately ejected after throwing his hat to the ground and arguing with the umpires. Redmond kicked his hat on his way back to the dugout for good measure.

“As a former catcher in this league for 13 seasons, as a grinder, as a guy who loves this game and respects this game so much, this game has been a part of my life forever, but to lose a ballgame tonight on that play is a joke, it’s an absolute joke,” Redmond said. “I don’t think anybody who plays this game should feel good about winning that game and I would say that if it had been reversed. That guy was out by 15 feet.”

“I thought it was pretty obvious from the replay that they made the right call,” Cozart said.

“Cozart was out by a fairly reasonable margin, but the catcher, from the inception of that ball going off the bat, had taken away the entire plate with his feet,” Price said. “His body was in the middle of the plate.”

During the delay Mathis, a 10-year veteran, was confident that he did everything right in accordance of the rules.

“I’m just disgusted,” Mathis said. “That’s a tough way to lose a game. … For it to be decided like that, it’s just disgusting.”

Marlins president David Samson said, “The fact of that matter is that everyone around baseball should be embarrassed by a call like that” during an expletive-laced postgame tirade.

MLB issued a statement about the play after the game:

“We have begun to examine the Crew Chief Review in tonight’s Reds-Marlins game, which resulted in a violation of Rule 7.13, the call being overturned and a run scoring on the play,” the statement said. “We plan to discuss this situation further with the appropriate parties tomorrow, and we will communicate with the Clubs after our discussion about this play.”

Chapman had to be tended to by trainers with two outs in the ninth when he had some discomfort in his right leg, but remained in the game and threw a 101 mph pitch to strike out Marcell Ozuna to end the game.

“I had a little discomfort in the leg,” Chapman said. “It was an awkward step I took when I made the pitch.”

TO TRADE OR NOT TO TRADE

The Marlins completed a six-player trade with the Houston Astros to acquire 24-year-old right-handed starter Jarred Cosart, who will be in Miami on Friday. There has not been a decision when Cosart will join the rotation.

The Reds did not make any deals at the non-waiver deadline.

“We were involved in a lot of different negotiations, but in the end we were looking mainly for offense and there really wasn’t the offensive pieces out there,” Reds general manager Walt Jocketty said. “In fact, none of the guys that we had talked about were moved. I think the asking prices were beyond what we felt comfortable with.”

CINCINNATI (AP) — Linebacker Vontaze Burfict has gone from low-risk investment to the heart of the Bengals defense in only... read more