‘This will be huge’ 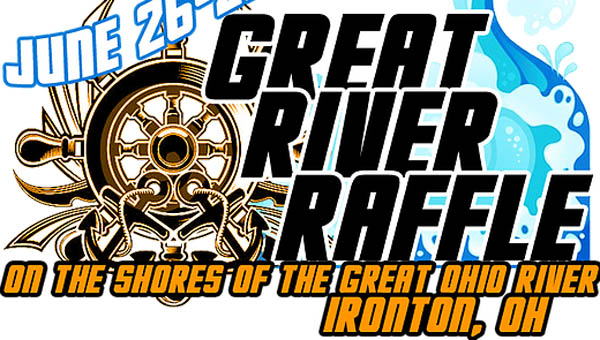 When thinking of a way to raise money — lots of money — stimulate the local economy and create an event that would bring people to Ironton a group of community leaders channeled their inner Toby Keith and decided it was time for a little less talk and a lot more action.

“So many people have so many wants and desires for Ironton,” Rick Jansen, president of Friends of Ironton and member of The Great River Raffle Committee, said. “Anything we can do to try and re-invent this city we will do.”

The endeavor is called The Great River Raffle. It is open to anyone over the age of 18, tickets go on sale Aug. 14 at Rally on the River and continue until June 2015 or until 10,000 tickets are sold. Tickets are $100 each.

Only one name is allowed per ticket. Prize-winning tickets are eligible for all other prizes and early bird raffles will take place for those who purchase their tickets early during the Rally on the River. One needs not be present to win. Regular drawing will take place June 26-27, 2015.

“This is going to be huge,” Jon Ferguson, executive director of Ironton aLive and raffle committee member, said. “We will give away a prize every five minutes for seven hours.”

Ferguson said he, Jansen and other committee members looked at five or six similar raffles and one in particular put on by the Ellenboro, W.Va., Volunteer Fire Department stuck out.

“The town of Ellenboro has 307 residents on the census,” Ferguson said. “They put one of these on and give away $650,000 worth of prizes. If a town of 307 people can put together something like this and make it work there’s no reason why we can’t.”

The Great River Raffle’s prizes total $500,000. Committee members spent two months compiling the prize list. Vacations, boats, guns, cars and cash are some of the items on the list, which includes a grand prize of $50,000.”

Taking a cue from Ellenboro and enhancing it, Jansen said, has created a golden opportunity.

“We have taken what they have done successfully for so long and used a little better technology and a bit better website,” Jansen said. “People also have the option of buying tickets online.”

The list of winners from the Ellenboro event revealed something that has become one of the focal points of The Great River Raffle: very few winners were from West Virginia.

“They reach out,” Ferguson said. “That’s exactly what we want to do. This event serves a dual purpose. We want to raise money to get started on some of these projects we want to get into. We are going to local vendors here and buying hundreds of thousands of dollars worth of merchandise. We are buying five vehicles from one dealership alone. We went to Harmon’s and bought three ATVs and to Malone’s and bought two boats. It’s not just about moving other things forward but it’s also an awesome way to strengthen our economy through our local businesses. It’s definitely been well thought out.”

Jansen said two motivating factors behind the raffle are not only getting projects off the ground but showing naysayers things can get accomplished.

“There are a lot of things we are still working through the political process of and making sure they are achievable goals,” he said. “They are big goals that some people walking down the street will say are impossible to do and can’t be done in Ironton and that’s the first reason why they lose is they put that limitation on themselves and this community. We can do any damn thing we want. If we are committed to it, we can do it.”

Some of these goals are improvements to the Ironton riverfront, continued restoration of the Ro-Na and creating a better recreation program for the community.

“This event will create other revenue streams for the hotels and the restaurants in Ironton,” Jansen said. “They will just be absolutely slammed when this is going on.”

The raffle drawing will take place in downtown Ironton. Visit the raffle’s Facebook page at www.facebook.com/greatriverraffle or its official website www.greatriverraffle.com for a complete list of prizes and official rules.

Pitcher Mike Leake struggled with his control but still only allowed one run in six innings as he won his... read more