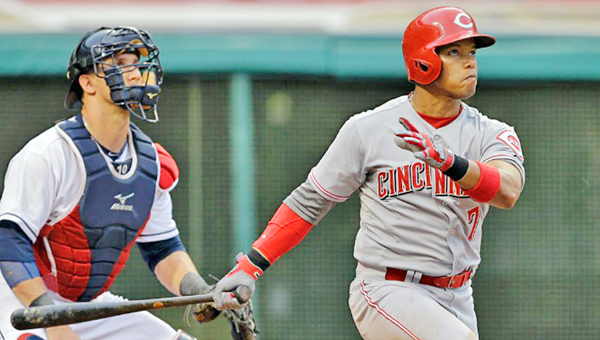 Cincinnati Reds’ Ramon Santiago watches as he hits a three-run homer in the second inning of Tuesday’s game. Santiago’s first home run of the season helped the Reds beat the Cleveland Indians 9-2. (Courtesy of the Cincinnati Reds.com)

CLEVELAND (AP) — Cincinnati Reds manager Bryan Price had never seen anything like it. Neither had anyone else.

Aided by a bizarre play in which Cleveland runner David Murphy was fooled by a second ball on the field and tagged out, Cincinnati defeated the Indians 9-2 on Tuesday night.

“That’s one of the strangest things I’ve ever seen,” Price said. “I’m sure that’s going to go down as one of those plays we see between innings for years to come.”

Johnny Cueto’s fourth complete game of the season was overshadowed in the seventh inning when the Indians had a rally squelched after an errant warmup pitch from Cincinnati’s bullpen came on the field, resulting in Murphy being caught off third base.

Lonnie Chisenhall drew a leadoff walk, and Murphy singled. Yan Gomes’ double cut the lead to 6-2 and moved Murphy to third as a ball thrown by reliever Jumbo Diaz rolled behind second base.

The confused Murphy mistakenly thought the ball was live and edged off third.

Third baseman Ramon Santiago took the relay throw and made the tag.

“The timing of it was crazy,” Murphy said. “I just didn’t know where the ball came from. It was unbelievable.”

Santiago was one of the few people on the field who knew the situation and called for shortstop Zach Cozart to make a throw.

“He said he understood our frustration, but they can’t kill a play until the conclusion,” Francona said. “It was perfect timing, and it’s the responsibility of our coaches and runners to know what’s going on. I can’t fault Murph, though, because he saw the ball there and thought they couldn’t throw him out.”

“I was confused,” he said of the strange play. “I thought a fan threw the ball.”

“Just when you think you’ve seen it all in baseball, you haven’t,” Santiago said. “You always see something new. That’s why it’s a beautiful game.”

Santiago hit a three-run homer in the second off Josh Tomlin (5-8) to break a 1-all tie for his first home run since Aug. 16 last season while playing for Detroit.

Cincinnati, which has been playing without All-Stars Joey Votto and Brandon Phillips, is 6-12 since the break, as it struggles to stay in the NL playoff chase.

The Reds broke a 10-game losing streak at Progressive Field.

Price admitted the bizarre play gave the Reds a boost.

“It may have saved our bacon a little bit,” he said. “At this point in time of the season we’ll do whatever we have to do to win a game.”

Catcher Brayan Pena thought Diaz should be given some credit for his warmup pitch that missed its target by a couple of hundred feet.

“Johnny should buy Jumbo a big steak,” he said.

Reds: Votto (strained left knee) who has been on the 15-day disabled list since July 8, is rehabilitating in Cincinnati. Manager Bryan Price said Votto is still experiencing soreness in the knee, and there is no timetable for his return.

Reds: Right-hander Mat Latos (3-3) starts Wednesday as the series shifts to Cincinnati. He will be making his 10th start after opening the season on the DL. Latos owns a 3.11 career ERA at Great American Ball Park, which is the lowest by any pitcher with at least 15 starts there.

Indians: Right-hander Danny Salazar (4-4) looks for his fourth straight win since returning from the minors. He has a 2.00 ERA while striking out 17 over 18 innings in his last three starts. Salazar has yet to face Cincinnati.

Bengals’ offense wants to have a hard edge