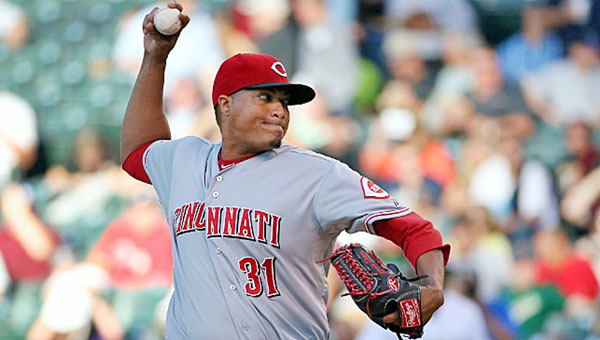 Still winless since the All-Star Game, Cincinnati pitcher Alfredo Simon gave up a career-high seven runs in the Reds 7-3 loss to Colorado Thursday. (Courtesy of the Cincinnati Reds.com)

Hitless in his last 13 at-bats, the Cincinnati Reds outfielder broke out in a big way during a 7-3 loss to the Colorado Rockies on Thursday night. He had an RBI double in the second inning, a solo homer in the sixth and then, for good measure, a single in the ninth.

His swing is back on track — at one of his favorite parks, too, where he’s hitting .398 for his career.

Not that he felt his swing was really all that off.

“I think 0 for 13 is a little deceiving,” Ludwick explained. “I’ve had some good at-bats. I just haven’t gotten hits. It’s been a weird year and this is the first ball I’ve hit all year that I’ve gotten into it.”

He certainly did, lacing a homer off Jorge De La Rosa (12-8) that landed near the top of the stands in left.

“Today, I just happened to think along with him,” Ludwick said. “Lucky guess.”

For one night, though, Charlie Culberson looked a little bit like the shortstop he’s trying to replace in Colorado. He had the power of Troy Tulowitzki and the nifty moves, too — jumping out of the way of a shattered bat fragment to cleanly field a grounder.

“Not Tulowitzki,” cautioned Culberson, “but if they put (me) in the lineup, I’ll be ready to play.”

Culberson hit his first homer in more than a month — a three-run shot in the fifth — and De La Rosa pitched seven effective innings.

With Tulowitzki set for season-ending hip surgery Friday, Culberson and Josh Rutledge figure to receive plenty of playing time at shortstop. Culberson definitely made the most of his opportunity Thursday.

“Tulo is our guy,” Culberson said. “And shortstop is a big spot to fill. … I feel like both us can go out there and fill in.”

De La Rosa allowed three runs and five hits as he improved to 8-2 at Coors Field this season.

Not bad considering he tweaked his Achilles running to first in the second inning. But he came back out to pitch and didn’t miss a beat.

“It was bothering me a little bit,” De La Rosa said. “But I was able to keep pitching in pain. We’ll take care of that before my next start.”

“He made some mistakes and they hit it hard,” Cincinnati manager Bryan Price said. “It’s just a matter of executing better pitches and having a better mix of pitches.”

Culberson broke the game open by lacing a 95 mph fastball from Simon into the left-field bleachers. It was his first homer since June 29.

Reds: RHP Homer Bailey is headed to the disabled list with a strained elbow. Price said he will announce a starter to take Bailey’s spot in the rotation Friday. There’s no timetable for Bailey’s return.

Rockies: OF Michael Cuddyer (broken left shoulder) could be back in the lineup Saturday. The reigning NL batting champ has been on the DL since early June.

Rockies: LHP Franklin Morales (5-6, 4.97) will make his first career start against the Reds. He’s faced them five times as a reliever, going 2-0 with two saves.

COLUMBUS (AP) — Ohio State has added home football games with UNLV of the Mountain West in 2017 and the... read more