Sick Air flips on banks of the Ohio 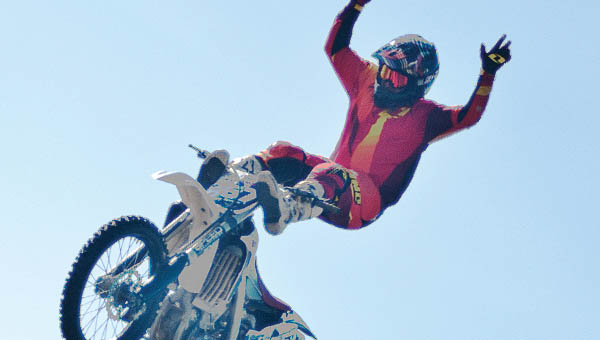 Ray Roehlk performs a freestyle trick at an exhibition during Rally on the River.

Christian rap music blared from speakers while 4-year-old Eli Murray rode a bike around the Ironhorse Campground on Saturday. Eli’s mother, Connie, looked after 10-month old Charlie Murray under a black tent while Connie’s husband, and Eli and Charlie’s father, Scott, was doing double backflips on a dirt bike many feet above.

Three times Scott made what look liked trial runs in the middle of the exhibition.

“I was trying to get a feel for flipping in a cross breeze,” he said. “It got a little squirrely toward the end. The wind pushed us over and when you’re in midair and your body starts to leave the bike, it’s not a good feeling.”

Also jumping at the event was Ray Roehlk, who began riding dirt bikes when he was 6 years old and has been performing freestyle for five years.

“I’m just filling in for a guy who got hurt,” he said. “I’ll leave here and go back to the Kentucky State Fair. All total I will be doing jumps several times a day for 11 days straight.”

Entertaining the crowd, earning a living and sending a positive message are all things Scott said he does with his profession.

“We have a lot of little kids who look up to us and want to do what we do,” he said. “Look in the crowd, look at the people who came down and wanted to meet us, it was kids. They are so easily influenced I took it upon myself to use what I do to be a positive influence. I don’t want other kids to hear or see anything I wouldn’t want my kids hearing or seeing. That’s the way I approach it.”