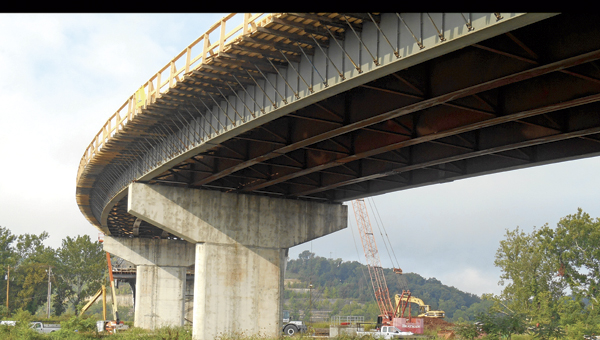 The new Ironton-Russell bridge has officially reached the halfway mark, according to Kathleen Fuller, a public information officer with the Ohio Department of Transportation.

The Kentucky portion of the superstructure is nearly complete and the approach to the Bluegrass State is already finished. On the Ohio side things are beginning to come together as all 35 girders have been fabricated and erected.

“The four deck placements or castings are next to follow on the Ohio approach,” Fuller said. “So far construction is about 50 percent complete.”

The bridges towers, which will be located on each end, are being constructed simultaneously, with the Kentucky tower slightly closer to completion than the Ohio tower.

“The Kentucky tower should be finished by the end of this year,” Fuller said. “It’ll probably be late spring in 2015 before the Ohio tower is complete.”

Brayman Construction Company is handling the building of the new bridge and its cost is estimated at $81.3 million.

“The bridge is on schedule to open in the spring of 2016,” Fuller said. “With demolition of the existing bridge to begin after the new one is open to traffic.”

CHESAPEAKE — A paramedic with the Lawrence County EMS has been terminated for cause following charges filed against her for... read more