In 2012 the last of those who fought in The Great War passed away, leaving behind their memorable stories of bravery and sacrifice.

On Saturday at the Lawrence County Museum Ironton remembered its World War I ace Col. William Lambert as historian Bill Martin of Ashland, Ky., recounted several stories of his friend.

“I got to know Bill and we formed a pretty strong friendship,” Martin said. “He was an eccentric character. There was something different about him, but he really was fascinated by flight and that is a fascination that never left him.”

According to Martin, Lambert’s interest in flight was sparked from watching turkeys fly on his family farm. That interest grew after a pilot, grateful for Lambert’s help, took him for a flight as a teenager.

“I’ve never been able to confirm this date as accurate,” Martin said. “But, he always told me that in 1910 a pilot was visiting Ironton in a Wright Flyer and when he got ready to leave it wouldn’t start. So William stuck right by that pilot’s side and brought him food and tools and helped him fix his plane.”

The next morning the pilot gave Lambert the opportunity to fly with him during his test flight before he departed from Ironton.

“He even let William control the plane for a little bit,” Martin said. “So he was probably one of, if not the first, people in Ironton to ever fly a plane.”

Lambert eventually joined the Royal Flying Corps division of the British military to provide aid during the First World War. During his time in World War I Lambert registered 22 victories, his first of which came by accident.

“In those days the younger pilots would fly alongside more experienced officers,” Martin said. “So they’re flying along and they spot some enemy aircraft down below. The officers fly down to engage the enemy and tell William to stay back.”

But, after awhile Lambert’s officers and the enemy planes disappeared into the clouds and didn’t emerge for quite some time.

“He got nervous, when he finally saw some planes come out of the clouds he thought “those are my officers” and he flew down to rejoin them,” Martin said. “When he got there he found himself right in the middle of a German formation.”

Lambert closed his eyes and began firing the machine guns on his Royal Aircraft SE.5a at random.

“He hit one of the German planes and it started smoking,” Martin said. “This scared the other pilots and they flew out of the area. Leaving William with his first victory, which was confirmed by one of his officers who happened to witness it.”

Lambert would receive a Distinguished Flying Cross awarded to Royal Air Force pilots who showed acts of valor while engaging the enemy. After the war ended he returned to Ironton where he became one of the Midwest’s most popular barnstorming pilots.

“He did the barnstorming for a while and when America got involved in World War II he enlisted in the U.S. Air Service,” Martin said. “He retired from the U.S. Air Force in 1954.”

Lambert would also write a book detailing his wartime experience called “Combat Report” that was published in 1973, just nine years before he died at the age of 87. 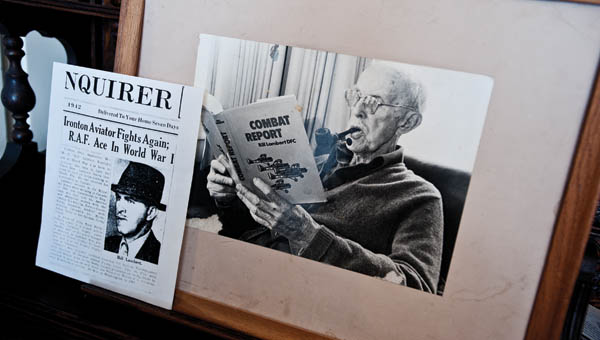 A portrait of Ironton legend William Lambert on display at the Lawrence County Museum.

Cincinnati Reds’ second baseman Brandon Phillips gets the force out at second base despite a sliding Jason Heyward during the... read more