‘A second chance at life’ 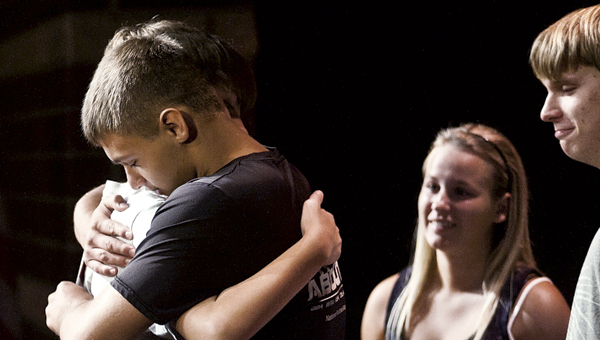 Ironton High School student Jordan Leach was already crying on Tuesday when fellow student Albert Schoener embraced her on stage in the school’s auditorium. That’s when crying changed to sobbing.

Leach is one of several people, along with fellow Sta-Tan lifeguards and IHS students Tyler Milleson and Brady Birkel, who are being credited with saving Albert’s life and they were all recognized on Tuesday during a surprise ceremony.

Less than three weeks ago the band was celebrating the end of band camp with a pool party at Sta-Tan. While eating pizza and cake and swimming Albert dove off the diving board, splashed in the water and didn’t return to the surface.

“We don’t know what happened,” Jeff Sanders, band director, said. “We know there was no horseplay and no unusual diving tricks, just some kind of freak accident.”

It was then when Leach, Milleson and Birkel entered the pool and for the first time in its 52-year history, pulled a swimmer from the water at Sta-Tan.

Albert’s body was blue and his toes and fingers were purple, Sanders said, no breath, no pulse.

“We started CPR and an ambulance was en route. Help was on the way” Sanders said. “But after two minutes of CPR, there was nothing.”

Finally, Sanders said, there was a gurgle, a cough and a gasp along with breathing and a faint pulse.

On the way to the hospital things didn’t get any better, Sanders said. Albert went into cardiac arrest and the ambulance was re-routed to the emergency room at St. Mary’s Medical Center in Ironton where he was stabilized. He was then transported by Air Evac Lifeteam from St. Mary’s in Ironton to Cabell Huntington Hospital. A trip that took a little more than seven minutes.

He had been unconscious for four or five hours. Doctors said he showed every sign of a traumatic brain injury and had a slim chance of surviving. Doctors also said, according to Sanders, if he survived he would likely suffer irreparable brain damage.

“Doctors said it was the persistence of those giving CPR that had gotten him that far,” Sanders said. “That was little comfort at the time because of how serious the situation was. After a very, very long weekend, a power greater than anyone here and beyond all comprehension took over. And a miracle happened. Albert didn’t just wake up, he didn’t just get better, but the doctor’s gave him a 90 percent chance of a full recovery.”

“I was at St. Mary’s ER when they were stabilizing (Albert) and I’m not a medical professional, I’m just a band director, but I tend to gauge these types of situations by how many people are taking care of a person” Sanders said. “If there’s one or two people then it’s probably not that serious. (Albert) had about 12 or 14 around him and we were pretty scared.”

Several other students’ parents, Lori Young, Randy Franz and Dru Pack, are also being credited with helping save Albert’s life for administering CPR after he was pulled from the pool.

“The only reason Albert made it is because these people didn’t give up giving him CPR,” Sanders said. “They insisted on him making it.”

Sanders said he’s always assumed being a lifeguard was a “cool job” because he had only seen them “sit and sun tan all day.” His opinion, he said, has changed.

“I’ve never seen a lifeguard jump into action and save anyone until that day,” Sanders said. “These are your peers, students in this school we all know. These are the people who jumped in the pool and pulled a wet body out.”

Ironton Mayor Rich Blankenship made a presentation and tearfully recalled an incident he experienced when he was a child.

“When I was about 7 or 8 years old, a cousin a couple years younger than me was swimming in a lake and unfortunately, he drowned,” Blankenship said. “That has been with me my entire life.”

Blankenship said his son was at Sta-Tan on that day and when he saw the police and emergency vehicles going toward the pool he called his son on his cell phone, but he did not answer. Upon arrival he was informed of what happened and said he knows “we all said some prayers. This young man has a second chance at life.”

Blankenship read a certificate of recognition for “acts of courage” by the ones who helped save Albert’s life that day.

At the assembly along with his father, Greg, was Albert’s mother, Debbie, who credits all who were there that night with saving her son. But most importantly, Schoener said her son is alive and well because of the faith of her family.

When Debbie first arrived at the pool, she saw her son lying on the ground receiving CPR.

She reached out to him, but emergency staff first stopped her.

“I’m laying hands on my son,” she told them.

Someone called out, “Let her pray for her son.”

After Albert was flown to Cabell Huntington Hospital, the medical staff gave Debbie news she didn’t want to hear.

“When we got there, they said he had 10 percent chance of living,” Schoener said. “They said he might be brain damaged.”

Schoener refused to be anxious or downhearted.

That night at Cabell when Albert woke up, he was mad because he had a life support tube in his mouth. Again the doctors told the Schoeners their son could be brain damaged.

And she was right. On Aug. 18, Albert had two CT scans and an MRI. The results were perfect. No damage to the brain.

“He didn’t get pneumonia or infection,” she said. “We are so glad our son is still here.”

Now Debbie has nothing but praise for all those who reached out to her son at the time of the accident and to her and her family during those frightening days before Albert was back home.

“The abundant love they have for their kids,” she said. “Ironton schools are wonderful.”

Many days after spending hours at the hospital, the Schoeners would come home to find that students, parents or staff had left presents or food on their porch.

“They gave us abundant love,” she said. “They made my faith stronger. I have never seen a community like this.”

In a year’s time the Lawrence County Academy has doubled its enrollment. The school that provides an alternative path to... read more