Fighting Tigers must shuffle new deck of cards against Pirates 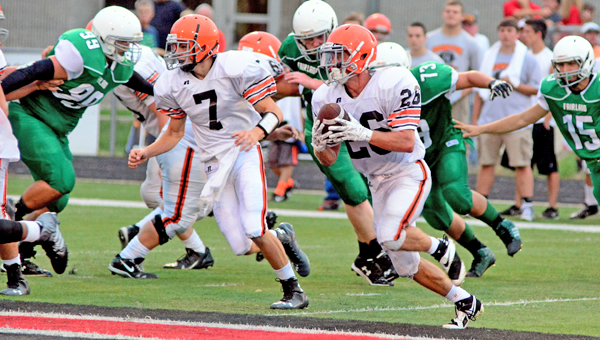 Instead of Texas Hold ‘Em, it’ll be Five Card Draw.

The Wheelersburg Pirates are switching their offensive attack this season, but Ironton third-year coach Mark Vass doesn’t see a lot of difference.

“They may run a different offense, but they still have a lot of their linemen back and they still have some really good skilled players,” said Vass. “Regardless of how they line up, they’re still a good team.”

Gone is read-option spread offense in favor of a two-back, option style offense that is operated by run-oriented quarterback Austin May (6-0, 160).

Although May takes over for the graduated Eddie Miller III, he did start at wide receiver last year and has been a quarterback in previous seasons.

All of the backs are seniors except Howard and Burk who are juniors.

“They are all good athletes and they can all run,” said Vass.

While all of the backfield is relatively new, the key for the Pirates will be up front when four interior linemen return from an 11-2 team that beat Ironton in the season opener last year 49-12.

The Pirates’ defense returns six players including Andrew Conn (6-1, 185) at end, Hall at nose guard, Warner and Hutchinson at the linebackers, and Burk and May at the corners.

“We had trouble moving the ball on them last year and they have most of their defense back,” said Vass. “They have some new starters, but they have a lot of seniors and that is a plus.”

CINCINNATI (AP) — Johnny Cueto was upset. Not by the lack of run support from the Cincinnati Reds. It was... read more