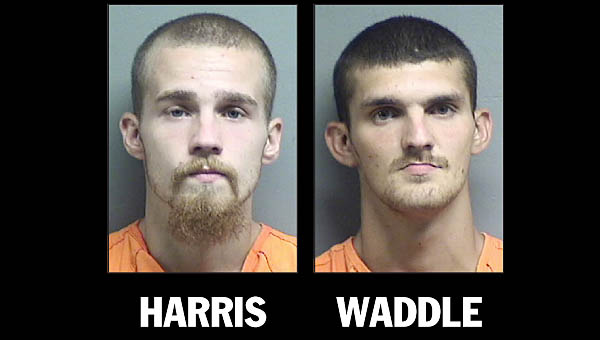 A rash of car break-ins and theft of two pistols on Thursday led to the arrest of two Coal Grove men.

COAL GROVE — A rash of car break-ins and theft of two pistols on Thursday led to the arrest of two Coal Grove men.

Coal Grove police chief Eric Spurlock said more than a dozen vehicles were broken into in the Jefferson Street and Sunset Nursing Home area, and High and Washington streets, one of which was a locked off-duty Ironton Police vehicle. From the cruiser David Harris, 21, of 506 Marion Pike, Lot 4, in Coal Grove, and Joseph Waddle, 23, of 506 Marion Pike, Lot 6 in Coal Grove, allegedly pried open the glove box of the police cruiser and took two pistols they allegedly used later to rob a man on the 400 block of Washington Street in Coal Grove.

Spurlock said Harris and Waddle each took a gun and allegedly held one to the man’s head and one to his chest, allegedly taking $19 in cash.

“We worked with the Ironton detectives and within 16 hours both men were in jail,” Spurlock said. “It was a good job by both departments.”

Spurlock and Ironton detective Capt. Joe Ross said the guns were found hidden in one of the suspect’s homes under a piece of furniture.

Ross said it is common practice for officers to leave handguns and rifles secured in their vehicles.

“We don’t know 100 percent if these were the two guns that were used,” Ross said about the holdup.

Ross said some of the cars were unlocked and smaller items were also taken such as DVDs and loose change. Ross encourages Coal Grove residents to join or start a neighborhood watch group. There is currently a “Coal Grove Neighborhood Crime Watch” that has more than 200 members.

The two men were arrested at their homes on High Street and arraignment is scheduled for Tuesday, Sept. 2, in Lawrence County Municipal Court.

Watching local high school football games is now just a few mouse clicks away. In a partnership with the broadcast... read more