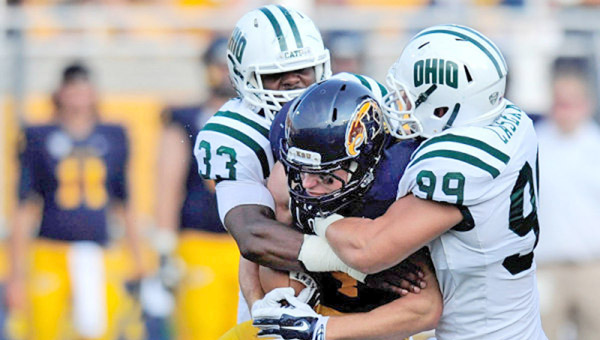 LEXINGTON, Ky. (AP) — Kentucky fans should enjoy the Wildcats’ dominating season debut against Tennessee-Martin — just not too much. At least not yet.

Sure, the Wildcats looked unstoppable at times in rolling up 656 yards and scoring the game’s first 52 points before yielding a pair of fourth-quarter touchdowns in the 59-14 rout. And offensive improvement was expected as players become more comfortable with coordinator Neal Brown’s pass-oriented Air Raid scheme.

The Wildcats also had some defensive highlights against their FCS-level opponent, forcing five turnovers.

“It was a good first step,” Kentucky coach Mark Stoops said on Monday,

UT-Martin did rush for 183 yards and Stoops stressed improvement is needed Saturday against Mid-American Conference member Ohio. The Bobcats edged Kent State 17-14 in their opener and have won five straight bowl games.

“They’re a team that’s not going to beat themselves,” Stoops said of Ohio during his weekly news conference. “They’re good and sound and return a tremendous amount of experience on defense. … We’ll have our hands full this week.”

At the same time, Stoops hopes his team’s dominating performance gives the Bobcats something to think about.

The coach was pleased with an offense that tallied the program’s fourth-highest yardage total in a game. Sophomore quarterback Patrick Towles’ first start offered promise as he hit long and short passes for 377 yards and a touchdown without being sacked; he also ran for a 23-yard TD.

Stout as Towles was, Kentucky’s backfield nearly overshadowed him by exploding for several long TD runs. Junior Braylon Heard’s only two carries were scores of 73 and 43 yards, a performance limited by a twisted ankle that sidelined him for the rest of the game.

Mikel Horton chipped in TD runs of 18 and 14 yards Jojo Kemp added a 2-yarder as Kentucky gained 234 yards on 28 attempts for an 8.4-yard average.

On the other hand UTM ran 81 plays — 20 more than Kentucky — and gained 150 of its 183 rushing yards through three quarters before scoring twice in the fourth.

Though the defense-minded Stoops wanted to keep things simple, he didn’t expect that from his regulars and expects them to do better.

“With the first unit there were areas we’ll need to improve on, fundamental things,” the coach said. “Our guys need to learn how to play football, learn how to play (off the blocks), have proper fits and how to make tackles.”

That’s particularly important for Kentucky against an Ohio squad that rushed for 175 of its 437 yards against Kent State. Bobcats quarterback Derrius Vick is also a concern after completing 18 of 24 passes for 262 yards and two TDs.

Ohio is looking for another win against Kentucky; in the schools’ first meeting in 2004 Ohio beat Kentucky 28-16 in Lexington. The Wildcats hope to build on their season-opening victory before the Sept. 16 Southeastern Conference opener at Florida and are looking forward to the challenge from the Bobcats.

Said Stoops, “We definitely can’t take anybody for granted.”

COLUMBUS (AP) — Urban Meyer has heard others say his team is too young, or that it was crippled by... read more