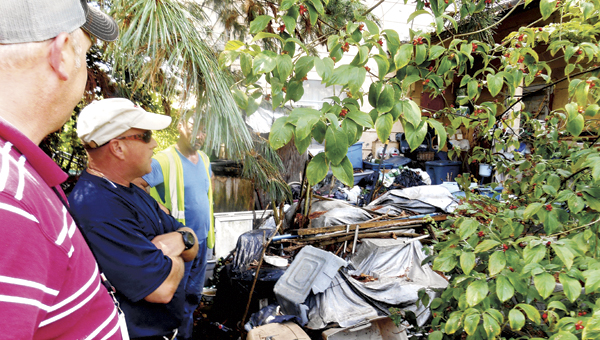 In the ongoing effort to clean up the City of Ironton the crew from the health department’s Weeds and Seeds Program is spending this week at a property on the corner of Fourth and Chestnut streets.

“We’re going to get the junk.” McKean, who is also a state-registered sanitarian, said. “It has to be removed. It’s harboring mosquitos, vermin of all kinds like raccoons and possums and snakes and rats.”

A junk automobile covered in brush will be tagged, McKean said, which is done to automobiles that aren’t being used, that don’t have plates or current tags. If after five days the vehicle is not put into an area where it can be stored properly it is towed.

The house is occupied and McKean said although he can’t speak for what’s inside the house, what’s outside is in violation of multiple ordinances.

“There can’t be noxious weeds and grass, solid waste and household garbage,” he said. “Plus the (doorways) are blocked.”

The property was selected because of multiple complaints and Willis said an auto accident at the corner of Fourth and Chestnut streets might be attributed to the excessive weeds.

“I’m not sure if it was officially brought up,” Willis said. “But between the police and street departments it was discussed that something had to be done with the weeds.”

Because of the condition of the property and the urgency created by it the homeowner will not have the cost of the cleanup assessed on property taxes.

“Usually if I generate a letter and there’s no response in five days of receipt of the letter then we send our crew in and they’ll take care of mowing, weed eating, brush and they’ll haul it off to compost and then we assess their taxes,” McKean said. “This one will not be assessed because of the urgency and the need for it to be rectified quickly.”

The health department will monitor the area once it is clean.

“We have areas throughout the city we work on,” McKean said, “and this one here is one of the worst.”

McKean said Ironton Health Commissioner Laura Brown discussed the issue with the homeowner and she “understands the weeds and the brush has to go, but I’m not sure she understands about the other items.”

Willis and McKean are working together targeting dilapidated structures, overgrowth, weeds and vermin throughout Ironton. Willis said 83 properties have been cleaned up or torn down in the past three years.

The city received $35,000 from Ohio Attorney General Mike DeWine’s office for demolition of dilapidated structures. “And we’re using every bit of it,” Willis said.

Anyone seen improperly disposing of trash or household items should be reported to the police.

As lunch time neared people began coming into Park Avenue Grill steadily. Some ordered lunch, some were having a late... read more