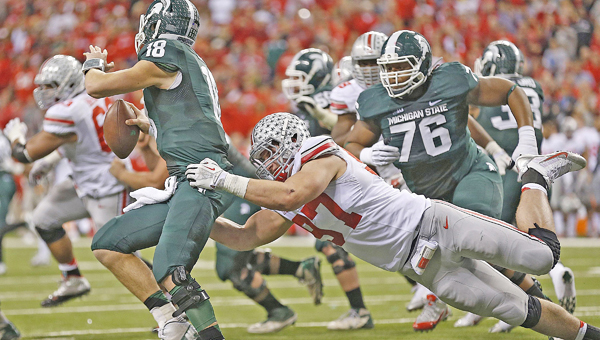 The Hokies are hoping this could herald a return to the spotlight after losing 11 games the past two seasons. Coach Frank Beamer has racked up 225 wins in his 28 years in Blacksburg, Virginia, but his teams have lost games before October in seven of the last eight years to quickly fall out of the national championship picture. Meanwhile, the Buckeyes are trying to build momentum while gaining experience for a young team. Frosh QB J.T. Barrett, filling in for the injured Braxton Miller, played well but the offense still got off to a slow start before overcoming Navy in the opener.

Tech offensive coordinator Scot Loeffler against the Buckeyes defense. The former Michigan QB was Ohio State coach Urban Meyer’s QBs coach for two years at Florida and knows how his old boss thinks. Tech QB Michael Brewer was good against FCS William and Mary last week, but this is a much bigger challenge against the Buckeyes’ veteran, aggressive front line and mobile linebackers.

Virginia Tech: RB Skip McKenzie went for 106 yards last week. He has to be that productive again to keep Ohio State from pinning back its ears and turning up the heat on Brewer.

Ohio State: If DEs Joey Bosa and Steve Miller and DTs Adolphus Washington, Tommy Schutt and Michael Bennett get mentioned a lot on the telecast, it could be a long day for the Hokies. That’ll mean that they’re disrupting the Tech front wall and making things easier on Ohio State’s green secondary.

A record crowd could be on hand at 92-year-old Ohio Stadium, since an $8.9-million expansion project has added 2,615 seats — raising capacity to 104,944. … Virginia Tech has never played before more than the 92,739 fans at LSU in 2007. … The Hokies have played against members of the Big Ten only twice before, splitting the decisions, both in bowls. … The Buckeyes have won their last 35 home openers and are 74-7 at Ohio Stadium since the start of the 2002 season.

BALTIMORE (AP) — There have been far too many losses for the Cincinnati Reds during the second half of the... read more