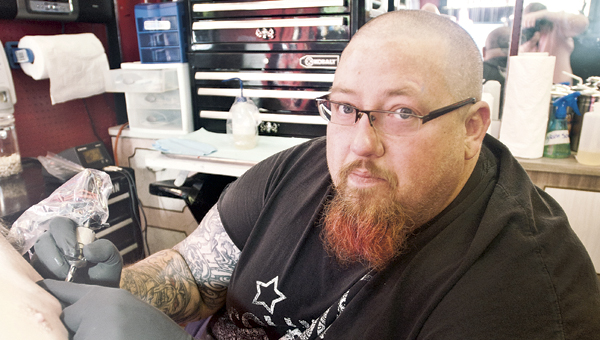 Three years ago Danny Van Sickle, owner of DVS Ink and Iron at 106 S. Third St. in Ironton, tattooed a portrait on the forearm of his friend and fellow artist Jimmy Williamson.

“That shows the longevity of my work,” Van Sickle said. “There were more than 100 tattoos entered in the contest and many of them were brand new.

“Jimmy said he was going to enter the Booth tattoo in the competition,” Van Sickle said. “I told the guy I was tattooing that if they had good judges who know what they’re looking at and know to look for the right aspects of that tattoo, it will place or at least win something. I never would have believed it would win best of show.”

Williamson said the judges knew immediately who the man was in the portrait.

“All they did was look at my tattoo and look at me and say, ‘That’s Paul Booth.’ I said, ‘Yes it is’ and they asked what number my entry was. I told them 12, they all wrote it down and said thank you. That was it.”

When Williamson attempted to give Van Sickle the plaque, he resisted.

“When (Williamson) came back to the booth he handed me the plaque and I told him it was his, he won it,” Van Sickle said. “He said, ‘No, it’s yours, you did the tattoo.’ It really touched me.”

Portraits are both artists’ specialty and Van Sickle said they are getting more popular.

“Not everyone can do a portrait,” he said. “Everybody thinks they can do them but not everybody can.”

Van Sickle also said he mostly does black and gray tattoos because that’s what most of his customers want.

“Black and gray is becoming more popular especially in economically suppressed areas,” he said. “Color is more expensive and takes longer but when I was in St. Petersburg, Fla., everybody wanted color because. It’s just the mentality of the area.”

Tattooing has taken Van Sickle all over the Tri-State and the country. Before Ironton, Van Sickle owned shops in Ashland, Ky., and Portsmouth. He also spent time traveling the country working at conventions.

“That’s where we got good,” Van Sickle said. “We got to rub elbows with good artists.”