Chesapeake rallies late to down Titans, 30-27 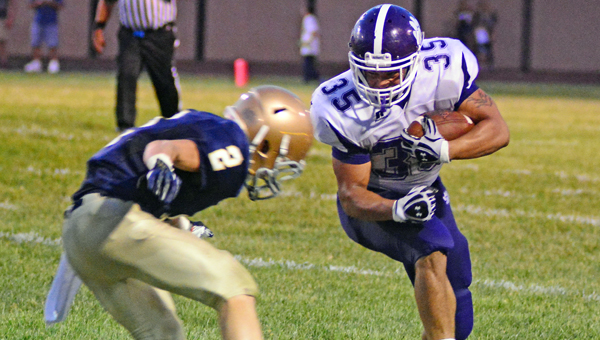 PORTSMOUTH — This is a one habit Chesapeake Panthers’ head coach Andy Clark doesn’t want his team to stop.

For the second week in a row, the Panthers rallied in the fourth quarter from a deficit as they beat the Portsmouth Notre Dame Titans 30-27 on Saturday.

The Panthers scored with only seconds remaining last week to beat Symmes Valley 21-18. Chesapeake trailed by 10 points in the second half only to rally for the win.

“The kids didn’t quit and we kind of wore them down in the fourth quarter. I was proud of them,” said Clark.

“Even at the end, they got more focused. Maybe it had something to do with last week. They stepped it up in the fourth quarter and that’s what you have to do.”

The Panthers (2-2) racked up 381 total yards including 308 on the ground. Freshman Cecil Fletcher came off the bench to gain 129 yards on six carries and he scored two touchdowns.

“He’s fast. He got to the point he was ready in practice. He gave us a little spark,” said Clark.

Casey McComas had 91 yards on 15 carries and Maccoy Brown added 77 yards on 17 tries.

A defensive stand by the Titans forced the Panthers’ Wesley Stephens to kick a 29-yard field goal with 7:14 to play in the first quarter.

The Titans came back with a 10-play, 61-yard march capped by Phillips’ 5-yard touchdown run.

The lead went to 12-3 when Isaiah Johnson picked off a pass and returned the interception 36 yards for the score.

The Panthers ran into more trouble when they shanked a punt that went just 4 yards. Two plays later Phillips ran one yard and it was 18-3 with 8:01 left in the half.

However, Chesapeake answered on its next possession.

McComas hit Kolton Webb with a 22-yard pass that set up Cecil Fletcher’s 39-yard jaunt for a touchdown and it was 18-9.

The Titans then fumbled and the Panthers recovered 42. A 15-yard penalty on the play moved the ball to the Titans’ 27.

On third and 9, McComas hit Colton Webb with a 20-yard scoring pass and Stephens’ kick cut the deficit to 18-16 with just five seconds on the clock.

The kicking game failed the Panthers again at the start of the second half when a bad snap on a punt led to a safety and Notre Dame now led 20-16.

After the free kick, the Titans got the ball at the Panthers’ 19 and Sam Kayser scored on the first play and the lead was 27-16 with 5:44 left in the third quarter.

Chesapeake changed the momentum on the next series as Fletcher broke free on a 62-yard scoring run and it was 27-22.

The Titans had a chance to add to their lead when Michael Collins ran 38 yards to the Chesapeake 1-yard line, but a penalty negated the play and the drive stalled as the Panthers held twice.

Chesapeake also had a chance to score but fumbled the ball away at the 1-yard line.

The Panthers got the ball back and drove 55 yards in six plays cap by a 26-yard pass from McComas to Webb with 6:37 left. McComas ran for the conversion and a 30-27 lead.

CINCINNATI (AP) — Andy Dalton, pass catcher? Why not? The way things are going for the Bengals, even the most... read more