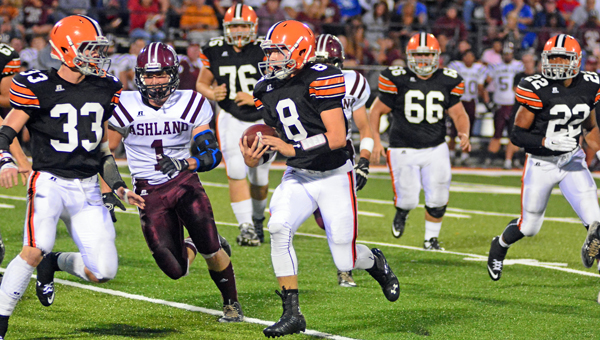 Ironton head coach Mark Vass might be putting up “Danger” signs all throughout the Fighting Tigers’ locker room.

The danger signs are all around as Ironton prepares to play the Trojans on Friday at Portsmouth.

Although the Trojans are 1-3, they are coming off a win over a much-improved Waverly, Ironton is coming off a high by beating rival Ashland, and Portsmouth has plenty of big-play skilled players to contain.

“There’s no doubt that this is a tough game,” said Vass. “Our guys have to put last week behind them. Portsmouth is a dangerous team with a lot of weapons. They score a lot of points in a hurry. You really don’t want to get in a shootout with them.”

Portsmouth opened the season with a 41-40 loss to unbeaten Lucasville Valley. The Trojans have five turnovers in the game.

Next was a 42-39 loss to Portsmouth West in a game in which their starting quarterback Sky Oliver was injured.

Playing without Oliver, the Trojans fell 45-13 to unbeaten Wheelersburg but rebounded for last week’s 29-27 win over Waverly.

“Their quarterback is just a freshman, but he’s pretty good. He doesn’t play like a freshman. He can throw and he runs their option well,” said Vass.

“Dickerson is a big threat and a big target and they have a couple of running backs who can run.”

Besides Dickerson, the Trojans have two other gifted receivers in sophomore slot back Luke Purdy (5-9, 135) and junior wide receiver Tristan Vista (5-10, 139).

Portsmouth will try to utilize its speed and quickness to make plays on defense.

“Their defense is better than it gets credit. They score so quickly offensively that their defense is on the field a lot. With their speed and quickness they can swarm you,” said Vass.

The inside linebackers are junior Austin Mullins (5-7, 176) and Sturgill with Robinson and Hollins on the outside.