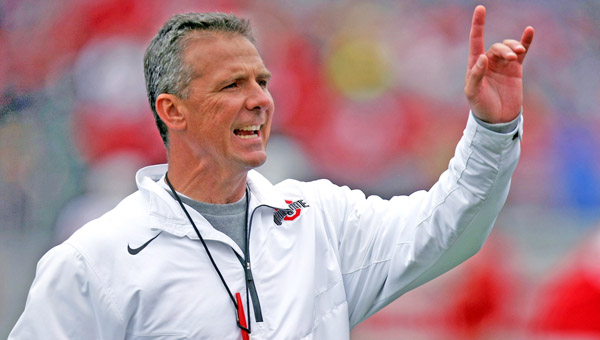 Ohio State Buckeyes head coach Urban Meyer talked to his team this week about where his team stands in its national championship drive. (MCT Direct Photo)

COLUMBUS (AP) — Most coaches hate to have their players talking or even thinking about what might happen a month or more from now. They particularly despise anyone looking ahead to the national championship game.

But not Urban Meyer. The Ohio State coach talked to his team this week about where it stands in the college football cosmos.

“When you look at it, everything’s wide open,” Meyer said. “College football, this is a pretty open year. I’d say we had a 5-minute discussion. Because I know I can hear it, probably, walking around campus or watching TV. So why not address it? So we address it and move on.”

The third-year coach of the Buckeyes (4-1, 1-0 Big Ten) picked this week to discuss the big picture for two reasons. First, the Buckeyes have their second bye in four weeks, so they could spare a few minutes. Second, Ohio State manhandled Maryland 50-24 in its Big Ten opener at noon last Saturday and that left plenty of time for Meyer and his players to check out a bunch of other games.

What they saw were 11 underdogs taking a hatchet to the rankings.

“I had a chance to watch some football last week and saw a lot of upsets,” Meyer said. “They called it ‘the strangest week ever’ or whatever.”

It sure was. Five of the top eight teams in The Associated Press Top 25 (No. 2 Oregon, No. 3 Alabama, No. 4 Oklahoma, No. 6 Texas A&M and No. 8 UCLA) lost. Six other teams ranked between 14 and 19 in the poll also fell (Stanford, LSU, Southern California, Wisconsin, Brigham Young and Nebraska).

All of those upsets are helping Ohio State.

The Buckeyes were ranked No. 5 in the preseason, fell three spots after a lackluster win over Navy in their opener, then plummeted to No. 22 after a stunning 35-21 loss at home to Virginia Tech on Sept. 6.

So little did the voters think of them, they even dropped another slot a week after their loss when they didn’t play. The initial College Football Poll selection committee rankings don’t come out until Oct. 28.

The Buckeyes have climbed the ranks while winning their last three games.

“We obviously weren’t happy about that,” Boren said of the loss to Virginia Tech. “But that never changed our mindset.”

After that defeat, several Buckeyes expressed confidence that they were still a factor on the national stage.

“It’s not the last game of the season. There’s a long way to go to finish out,” tight end Jeff Heuerman said. “Coach Meyer’s message after the game is there’s a lot to accomplish but we have to accomplish it at 11-1.”

Defensive lineman Darryl Baldwin added, “We’re not done yet. We’re not out of it either, by any means.”

Linebacker Joshua Perry chimed in: “It’s a long season and anything can happen.”

Those words all sound prophetic now that so many of the high and mighty have been knocked down a peg or two.

Meyer hoped to minimize any speculation by talking about what was going on around the country.

“I don’t want to make it bigger than it is,” he said. “We talk about it briefly and we move on. I don’t think these kids care. I’m hoping that they just want to get better.”