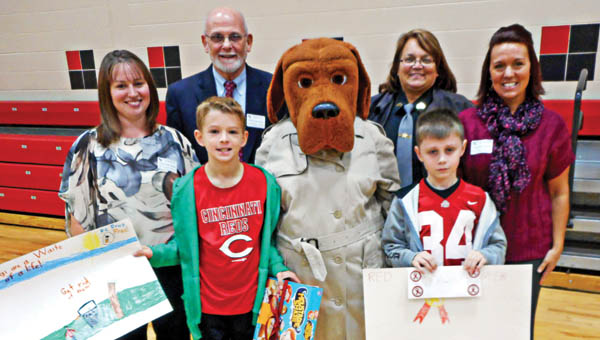 The message was simple: Keep calm and stay drug free.

Those words were printed on red bracelets given to third-graders at Dawson-Bryant Elementary on Tuesday during an anti-drug presentation in recognition of Red Ribbon Week.

“What does your heart do?” Chrystal Pinkerton, chemical dependency counselor assistant for Spectrum Outreach Services, asked the students. “It keeps you alive,” one student responded. “That’s right,” Pinkerton said. “Drugs harm your heart and that’s not a good thing.”

The National Family Partnership organized the first nationwide Red Ribbon Campaign in 1985 in response to the murder of the United States Drug Enforcement Agency’s Enrique Camarena. Angered parents and youth in communities across the country began wearing red ribbons as a symbol of their commitment to raise awareness of the killing and destruction caused by drugs in America.

“I know all of you take medicine when you get the sniffles or an ear infection,” Pinkerton said. “If you take too much of helpful drugs, it can harm you.”

Pinkerton then asked what drugs were harmful and how. Students blurted out responses such as “they cause cancer” and “they mess up your heart by making it beat faster.”

A poster with a side-by-side comparison of a healthy brain and a brain affected by drug use was shown to the group.

“Drugs not only affect your brain and heart,” Pinkerton said. “They also affect your liver and kidneys. There are a lot of ways drugs can do harm to your body.”

McGruff the Crime Dog and sheriff’s deputy Julia Jones joined Pinkerton to lead the students in an anti-drug cheer.

The National Family Partnership sponsored the first National Red Ribbon celebration in 1988. Today, the red ribbon serves as a catalyst to mobilize communities, educate youth and encourage participation in drug prevention activities. Since that time, the campaign has reached millions of U.S. children and families.

Winners of the “Don’t Trash Your Life” poster contest were announced following the presentation. Ashton Smith won third place and a $10 McDonald’s gift card. Second place went to Sam Large, who received a board game, and first-place winner was Carly Robinson, who received two board games.

Biomass site to be sold