Ironton’s defense clamps down on Raceland 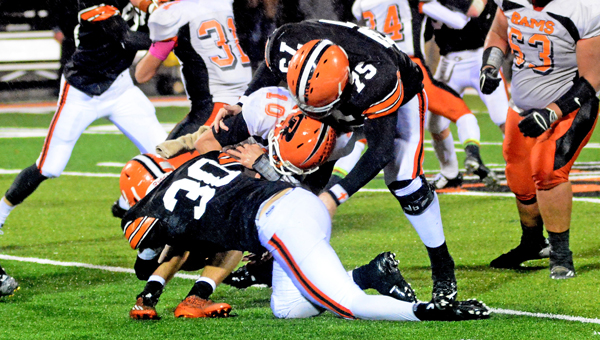 When two high-scoring teams meet, it seems like it always comes down to defense.

Ironton came in averaging nearly 33 points a game and Raceland more than 41 points a contest. But it was the Fighting Tigers’ defense that proved to be the difference as Ironton beat the Rams 25-12 Friday.

Ironton held Raceland to 156 total yards and a mere 7 net yards on 17 plays in the second half and no first downs. Both Raceland touchdowns were in the first quarter.

“The key to the game was the defense. We stepped up and D’Angelo (Palladino) busted a couple of big runs,” said Ironton coach Mark Vass whose team locked up a home playoff game next week with the win.

“The first half we had a couple of miscues and we didn’t tackle well. The second half we tackled and we stopped their offense.”

Ironton (7-2) finished with 293 total yards — all on the ground. Palladino had 171 yards on 16 carries and scored three touchdowns. They tried just two passes.

Desmond Young had 47 yards on 13 carries and Caleb McKnight — who normally plays one way at defensive tackle — ran five times for 39 yards.

“The first touchdown was wide open. The line blocked well,” said Palladino. “The second touchdown I found a crease. The third touchdown I don’t even know how I scored. The line did a great job. We’ve come a long way since (the first game).”

The key series in the game came with 4:59 left in the third quarter when Ironton fumbled the ball away at its own 26 and the scored tied 12-12.

Kane Snyder was stopped for a 1-yard loss, Josh Young threw an incomplete pass when he was hit by McKnight while throwing the ball, Young was tackled by Hayden Robinson for no gain and a fourth down pass to Snyder netted only 4 yards.

“Our defense was making good plays. We had to step up,” said McKnight. “If they scored, it would be very detrimental. We gutted it out. I’m proud of our team.”

Ironton then went 77 yards in eight plays capped by Palladino’s 45-yard touchdown bolt past the Rams’ defense. Luke Kelley kicked the point after and it was 19-12 with 11:43 to play.

Raceland (8-2) got the ball at the 41 and a fourth-and-1 run by Snyder came up inches short of the first down.

Ironton scored seven plays later when Palladino went 30 yards on a sweep and it was 25-12 with 5:34 left.

Raceland got the ball at the 35 and began to move backwards. Young was sacked for an 8-yard loss and a holding penalty pushed the ball back to the 10.

The Rams punted the ball away and Ironton got it at the Raceland 37. Seven plays got the ball to the 1-yard line where Cox took a knee to end the game.

Each team scored twice in the first half. And with the exception of one Ironton touchdown, both teams fumbled snaps on the extra points and were unable to convert.

Took the opening kickoff and went 63 yards in seven plays. Conner Messer was tackled for an 18-yard loss but Ironton was called for a personal foul on the play that took the Rams out of a hole.

Young scrambled and hit Austin Howard on a 25-yard pass to the 6-yard line and Messer went 2 yards two plays later for a 6-0 lead.

Ironton held on a fourth down and got the ball at the Rams’ 40. After a 4-yard loss on first down, Palladino ran 44 yards through the middle of the defense and it was 6-6 with 3:27 on the clock.

A 58-yard run by Carson Christian on the first play after the ensuing kickoff got the ball to the Ironton 14 and Messer ran the final yard five plays later to put the Rams back in front 12-6 with 58 seconds left in the first quarter.

The Fighting Tigers got to the Rams’ 34 when a fourth down play came up inches short.

After an exchange of punts, Ironton forced another punt but a fumbled snap on the attempt gave Ironton the ball at the Raceland 20. Palladino ran 16 yards and 3 yards to the 1-yard line where Young powered into the end zone with 1:05 left in the half to tie the game.

Raceland managed to get to midfield only once on its five second-half possessions.

Christian ran seven times for 91yards as the Rams had 128 yards rushing for the game.

“This was a good win for us. Raceland’s a pretty good team. We knew it would be a tough game,” said Vass.

Ironton will now host Martins Ferry at 7 p.m. Saturday in the Division V Region 17 playoffs. Raceland will host Phelps on Friday in the Kentucky Class A playoffs.