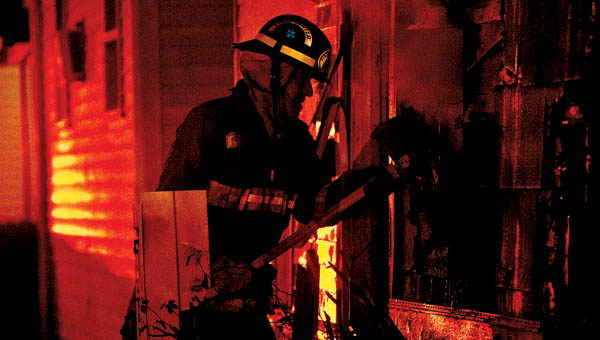 THE TRIBUNE/JESSICA ST JAMES
Ironton Fire Fighter Jack Delong uses an ax as he battles a house fire on the 1900 block of South Second Street early Thursday morning. The fire was reported after 5 a.m. and was fully engulfed. The home is a total loss.

No smoke detectors in either residence

Nearly a dozen people are safe this morning after two house fires sent residents out into the cold.

The Ironton Fire Department responded to the first fire in the 2600 block of South Third Street just after 5 a.m.

Chief Tom Runyon said the two-story house caught fire as a result of bad wiring in a wall. Runyon said a resident in the home smelled smoke earlier in the evening but couldn’t see anything. Later the man walked through the home and saw smoke.

While firefighters were on the scene, another fire broke out in the 1900 block of South Second Street.

Runyon said Ironton police officers went to the scene while more fire crews were called out.

Nine people, three of whom actually lived there, were in the single-story home and Runyon said neighbors helped them escape.

“It was a total loss,” Runyon said. “It (the fire) was through the roof when they got the call.”

Runyon said the house had been remodeled quit a bit, which made fighting the fire difficult.

“We found three layers of ceiling and roof, it makes it very difficult,” he said. “We’ll still be on fire watch a while today.”

Runyon said neither home had a working smoke detector. He also said this time of year is especially dangerous for those heating older homes.

These older homes, especially the one on Second Street, it was just a small fuse box,” Runyon said. “When you have something like that and you’re using a portable heating system, that really takes a toll on older electrical systems. We don’t want people to be cold, but we want people to be safe.”