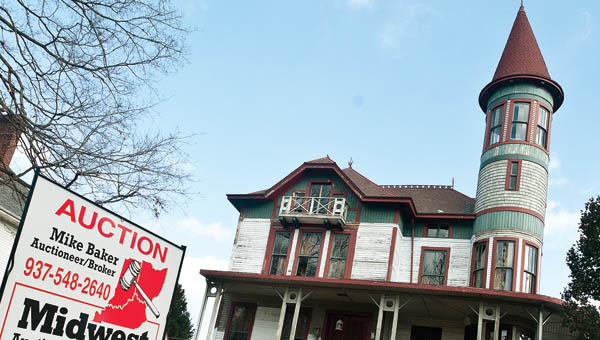 THE TRIBUNE/JESSICA ST JAMES
This Tuesday, the Tower House, located along South Fourth Street, will be auctioned off by Mike Baker with Midwest Auctioneers and Reality Inc.

On Tuesday the Tower House goes on the auction block with many Ironton historians afraid the onetime mansion may come tumbling down.

At 4 p.m. Mike Baker from Midwest Realty and Auctioneers will start the bidding on the 19th century house built by ironmaster Frederick Norton.

“It is a public auction and anybody can bid,” said Baker, who plans to conduct the auction on the steps of the Queen Anne house.

Terms are $3,000 down the day of the auction and the remainder paid within 35 days.

“They must be able to close within 35 days,” he said. “Any financing should be done prior to the auction.”

Doors will open at 2:30 p.m. for prospective bidders to look around.

“There isn’t going to be an opening bid,” Baker said. “We are not doing that.”

Midwest Realty, based in Greenville, 35 miles northwest of Dayton, has worked with Community Trust Bank that currently has the deed to the house, which has had a variety of owners over the past 14 decades.

“We have done some work in the past for Community Trust and they asked us to do this,” Baker said.

One of the most recent was the late Robert Price, known for his research into the history of Ironton and was a member of the Lawrence County Historical Society.

“I hope it will be restored,” Kay Rader, also a historical society member, said. “Bob Price spent a lot of money on it. He spent over $200,000 on it and put in furnaces and did electrical wiring. He did a tremendous amount of work. It is just a bit of history in Ironton, our glorious past.”

The house was built in 1874 by Norton, who was the owner of the Norton and Belfont Iron works. Architectural details include a cameo etched into the front door knob, fretwork molding and yellow poplar floors.

“We have several interested parties that are interested in restoration,” Baker said. “We anticipate the new buyers are going to be the ones to restore the property to its original condition or something similar to that.”

Police say 6 children left unattended An Ironton couple is behind bars following allegations that children in their home as young... read more