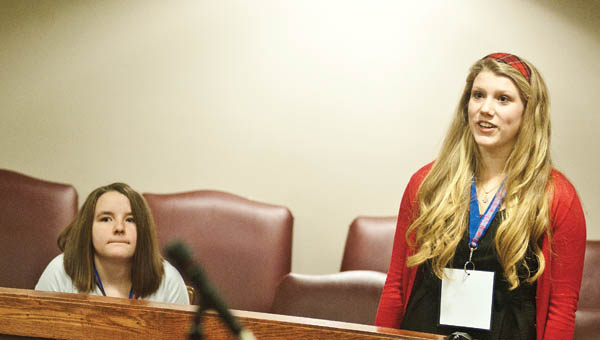 THE TRIBUNE/JESSICA ST JAMES
Fairland student Holli Leep begins to show the expression of being a first place winner after spelling the word, popularity, during the 2014 Lawrence County Spelling Bee while Emily Neal watches.

From the start of the 11th round Wednesday, it was Emily Neal versus Holli Leep.

“I didn’t win at all last year,” Holli said. “Not even the school’s spelling bee.”

The two went head-to-head for 12 rounds in the Ironton Municipal Courtroom, with Holli correctly spelling such words as ostentatious and bureaucracy and Emily sailing through magnanimous and formidable.

In the 23rd and final round, Emily was given the word “crochet.” After brief thought, she began spelling “c-r-o…” and then, it happened. Emily continued “…q-u-e-t.”

“That’s incorrect,” Amy McCallister, Emily’s pronouncer, said. Emily has Cochlear implants and McCallister’s voice is easier for her to hear and understand.

“I feel so excited,” Holli said. “I studied a lot and winning this makes it all worth it.”

Emily’s reputation in the county’s spelling circles precedes her. Holli said she knew winning was not going to be easy with Emily as a competitor.

“She’s really good,” Holli said about Emily. “She beat me when we were in fifth grade. She won and I was runner up.”

All students who qualified for the county bee can pass an online test and compete in the regional competition in March at Ohio University in Athens.

“She’ll take the online test and go to regionals,” Shelley Neal, Emily’s mother, said. “(Emily) misheard the word, and that will happen. I’m so proud of her. In four years she has finished second, first, first and second.”

Both Holli and Emily have one more year to compete in the bee.

“It’s interesting to see all the kids’ different emotions,” Dr. James Payne, Lawrence County ESC superintendent, said. “They all have worked so hard to prepare and so many people worked really hard putting this together. I appreciate what you, the parents and grandparents and others here today, have done and are doing to make this a special time for these students.”

Director of Marketing and Community Relations at St. Mary’s Medical Center Doug Korstanje, in his second year as pronouncer, prior to the bee praised all the students who qualified.

“Congratulations to all of you,” he said. “No matter how you finish here today, you are still one of the best spellers in the county.”

The first speller was eliminated in the fourth round. Three more took seats in the audience in the fifth round with words “bruin,” “prairie” and “belladonna” being misspelled, respectively.

Judges for the bee were Cheryl Blankenship and Lori Shafer from the Briggs Lawrence County Library.