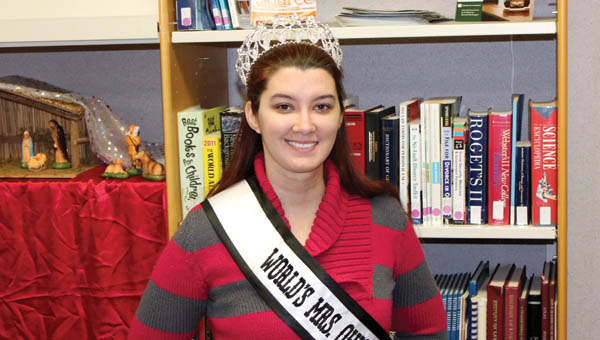 CHESAPEAKE— Latoria Potter, of Chesapeake, may have won World’s Mrs. Ohio Tourism 2015 in the World’s Miss Tourism Pageant, but life has not always been easy for her.

“I grew up in a rough life. I’ve been through foster care, I’ve been bullied and have been a victim of domestic violence,” Potter said. “I was a wild teen and I didn’t want to listen because I thought I knew it all. I got into a lot of trouble and was put in a girl’s group home for 16 months.”

Potter knew she had to turn her life around.

“When I was about 18 or 19 years old, I finally straightened up,” Potter said. “I realized I was an adult and needed to act differently, although it was really hard.”

The World’s Miss Tourism Pageant is not a typical pageant in that it is community-service based.

“All of the tourism girls strive for community service and to be good role models,” Potter said. “I wanted to be a good role model. I want to show girls who are going through some of the things that I have been through that it can be overcome and you can still be something.”

Potter won the Ohio crown for the “Mrs.” category, which involves married women ages 21 to 49.

“Ohio doesn’t have a state director, so there was no actual state pageant. I competed in an online pageant, where I won my title,” Potter said. “With online, it’s different because it is just a photo pageant where I submitted photos. When it closed, they were sent to judges where it was judged just like a regular pageant.”

With winning the title, Potter is required to do community service and make public appearances.

“I was very excited when I found out I won,” she said. “I never really expected it, but I was hopeful.”

Potter wants to use this as an opportunity to make a positive difference.

This coming July, Potter will go to Nashville, Tennessee, to compete in nationals.

“So far, all of the girls who are in the tourism pageant are all like a family,” she said. “A lot of us are Facebook friends, but I am looking forward to meeting all of them and making new friends. It will be a lot of fun.”

Youth should be praised

Each year, especially during the holiday season, organizations throughout the region have various fundraisers along with food, clothing and toy... read more