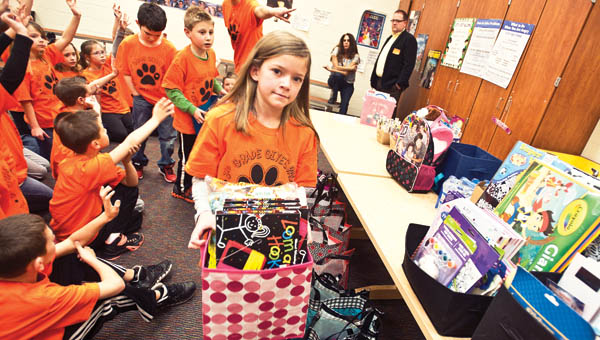 THE TRIBUNE/JESSICA ST JAMES
Students from Ironton Elementary School help to load up baskets full of donated items such as toys, games, hairbrushes, books and items for infants to adult teens Thursday.

The reason for the collection was so third-graders could raise money to buy baskets of items ranging from socks, candy, hairbrushes, games and more to give children in the pediatric unit at Cabell Huntington Hospital.

“This has been good for the students,” Maynard said. “It gives them some invaluable community service experience at a very young age.”

While the orange-clad third-graders sat in the music room at the elementary school waiting on Velma Workman development outreach coordinator for the Cabell Huntington Hospital Foundation, to pick-up the baskets, some students explained why they feel the project is important.

“It makes us happy and helps the kids in the hospital feel better,” Dillon Walden said. “These baskets help them be entertained and not get bored.”

“We had a toy drive,” she said. “We brought in things like toothbrushes and arts and crafts. We made bags for parents, too, so they can feel better since their kid is in the hospital.”

Third-grade teacher Sarah Newman said the students’ parents helped by donating and an announcement was made each morning reminding everyone to donate their pennies.

“I called the hospital and asked what the pediatric patients need,” Newman said. “I made a list from what I was told and we bought as many of those items as we could.”

Newman said baskets were for ages infant to 18 years old.

Nathan Disney said he was saving the money he received for his birthday to buy an Xbox One, but decided to donate it toward the baskets. Bryson Hayes said he saved $50 to buy a cellphone, but when his mother told him he couldn’t have one, he donated the money. Isabella Sorbilli found a “bag full of change” she was going to put toward buying a cellphone, but that money was ultimately donated.

“These baskets contain the normal things most children have in their house,” Workman told the students. “Items like these take children’s minds off the fact they are in a hospital and makes them less anxious. When kids are less anxious, so are the parents.”

Workman iterated to the students how much what they did will benefit the pediatric patients.

“I’ll take pictures and send them to you so you will know just how much it means to them,” she said. “Some children have been in the hospital for months. Some live there. Some get to go home for a few days but then have to come back for a while. It’s a scary place for a child to be.”