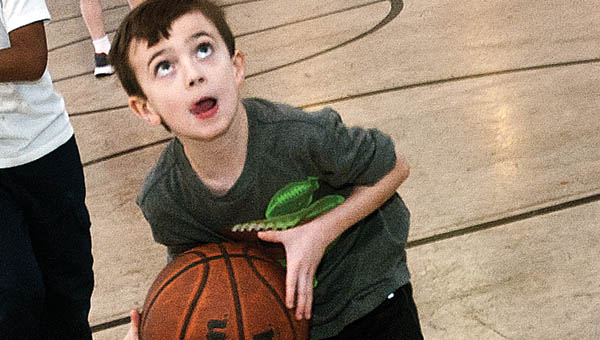 SOUTH POINT — About two dozen children formed a single-file line in front of a podium in the gymnasium behind Tri-State Baptist Temple in South Point.

“Rejoice in the Lord always: and again I say, rejoice,” they began reciting one by one. “Good job,” assistant pastor Evan Melvin said from behind the podium as he added a star to each child’s name as a reward for memorizing Philippians 4:4.

Memorization of a particular Bible verse is just one way the 55 4-year-old to sixth-grade children who belong to the church’s King’s Court Youth Basketball and Cheer Program earn points.

“We place an emphasis on spiritual values,” Melvin, who has been assistant pastor for five years, said. “They get stars awarded for performance, but they get one for memorizing the Bible verse, too. We want to teach basketball, but we want the kids to have good character as well.”

Laura Carey’s 7 year-old son, James, has been a member of King’s Court for the past three years.

“I love it,” she said. “It teaches the children responsibility and respect. It’s so good for all of them and James really enjoys it. I’m so amazed at how well Evan and (King’s Court director Drew Griffin) are with these children. It’s not easy to coordinate things with children this age and they do a great job.”

King’s Court is nearing its 10th year and Melvin says the church has gained families because of the program.

“We’ve had people sign up for King’s Court whose family didn’t have a church,” he said. “Because of basketball they will start coming to our church, and that’s really the point. We want to teach basketball, but the focus is the Lord.”

Registration for King’s Court is closed for this year. For information about the program, call 740-377-4739 or stop by the church at 1300 County Road 60 in South Point.