Dancing with Our Stars: Highlands Museum preparing for second fundraiser 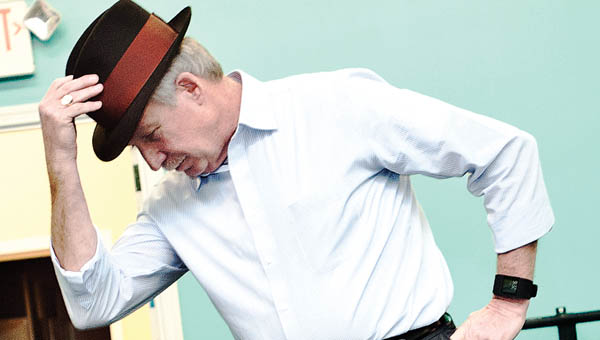 THE TRIBUNE/JESSICA ST JAMES
Ashland Mayor Chuck Charles practices his dance routine for an upcoming “Dancing with Our Stars” competition.

ASHLAND — Ashland Mayor Chuck Charles tips the brown fedora he’s holding and waits for the music to pulse through the speaker. When the music starts, Charles tosses his hat in the air and reaches out for his partner and choreographer, Maria Whaley.

Then, the two are off in a whirl of steps to the beat of the Latin merenque.

It’s only a practice, but the dance couple is hoping to snatch the Mirror Ball Trophy on Feb. 7 as they compete against eight other couples for this year’s “Dancing with Our Stars” fundraiser.

Last year, Charles was the master of ceremonies, but this year he’s taking to the stage with Whaley, director of the Ashland Youth Ballet.

The fundraiser for the Highland Museum and Discovery Center is based on the popular television show “Dancing with the Stars.” This time local celebrities and their choreographers will compete for $1 votes to win the trophy.

“It’s a fun evening that begins with cocktails and then a wonderful dinner by the Bellefonte Country Club and then the competition with people who are well-known in the community and local dancers who are working with them,” Carol Allen, executive director of the museum, said. “There will be a great variety of a lot of different dances.”

Before the couples dance, a video they produce will be shown followed by their performance, ending with the pairs going up into the green room to talk about it, just like the show, she said.

For the past few Saturdays, Charles and Whaley have been polishing their routine at the Ashland Youth Ballet studio.

“The Highlands Museum is really a tremendous asset that Ashland has. I’m doing this to help support them and their mission,” Charles said. “When you look at the mission of the museum, it’s about our past. It aligns with what I believe in and what my city believes in. I’ll do whatever I can to support that.”

Whaley feels the same way about the Highlands Museum.

Whaley has taught dance as a certified instructor for 32 years. She also teaches theology and performing arts classes at St. Joseph High School in Ironton.

This event is one of the bigger fundraisers for the Highlands Museum.

“Last year, we raised quite a bit of money for the museum,” Allen said. “It helped with our space center exhibit with our partnership with Morehead State University along with other help from the city. It enabled us to have an exhibit of this caliber.”

The event is at the Boyd County Community Center located at 15605 Kentucky 180 Catlettsburg, Kentucky. Cocktail hour begins at 6 p.m. followed by dinner at 7 and the competition at 8. Music will be performed by City Heat.

The Tribune/Dustin MelchiorThe damaged chain-link fence caused by the crash Saturday at the mobile home next to Bevins Auto Sales... read more