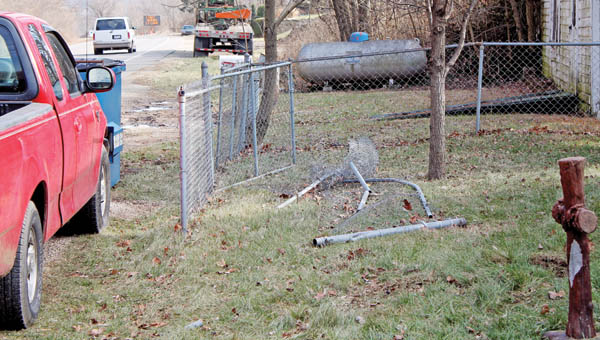 The Tribune/Dustin Melchior
The damaged chain-link fence caused by the crash Saturday at the mobile home next to Bevins Auto Sales in Chesapeake.

Curtis A. Combs, 41, of Proctorville, was traveling northbound on State Route 7 when his 1995 black Honda Accord gradually drove off the right side of the road striking a south bound parked 2007 red Chevy Cobalt that hit a chain-link fence and the mobile home next to Bevins. Combs’ car continued on and hit a 2010 silver Ford Taurus parked northbound behind the Cobalt, which then struck a southbound parked 2010 light green Ford Focus that hit and tipped over a Dumpster. Combs’ car ended up in the ditch across the road facing State Route 7.

“My mother-in-law lives in the trailer next door with her sister,” James Bevins, owner of Bevins Auto Sales, said. “I closed at noon, and I hadn’t quite made it home yet when my mother-in-law called me. I turned around and came back.”

According to the crash report, Combs said he swerved to avoid hitting a brown hound dog.

Combs’ stated that he was traveling approximately between 40-45 mph. In the traffic crash statement, Combs said he was wearing his seatbelt and takes blood thinners and blood pressure medication.

“My sister and I were sitting here watching a movie. I have a perfect view of the traffic,” Connie Stanley, Bevins’ aunt-in-law, said. “I saw this car going really fast. When it crashed, it sounded like a bomb went off. It was that loud. I literally thought there was an explosion.”

“He had gone through the windshield, and there was no front end on his car,” Stanley said. “I’ve been a nurse for quite a few years, so I knew to keep him still. I wanted to keep him talking too, so he could stay awake and aware.”

Combs wasn’t able to get out of his vehicle after the accident.

“He had severe injuries and broke his shoulder and hip,” Sgt. Chris Smith, of the Ohio Highway State Patrol, said.

Combs is currently in the intensive care unit at a local hospital for a heart condition that is not crash-related, Smith said.

“There’s something that caused him to gradually drive off the road,” Smith said. “We aren’t sure if that was heart-related.”

Stanley and Rigney have a 150-pound cross in the ground outside of the residence that minimized damage done to their home.

“The cross out there kept the car that he hit from coming further into the house,” Stanley said. “I believe that where that cross was placed was a blessing.”

All of the cars involved were totaled and towed to Hawthorne’s Towing in Chesapeake.

“I’ve been here five years and have never seen anything like this,” Bevins said. “It’s not as bad as it could have been I guess.”

Rendering next step in re-creating old courthouse: Could be used as community building

BURLINGTON — Replicating Lawrence County’s first courthouse is in the hands of a Columbus architect who will create an artistic... read more