At a glance, Dawson Mahaney looks and acts like any 9-month-old child would, his bright blue eyes constantly taking in the world around him.

On Wednesday, he sat on his grandmother’s lap as his 4-year-old cousin Emily Mowery gave him hugs and kisses.

They were visiting the Lawrence County Courthouse where Kristen and Courtney Mowery, Dawson’s mother and aunt, were manning a bake sale booth for a special cause.

Dawson was calm and content, but his little heart was beating overtime. 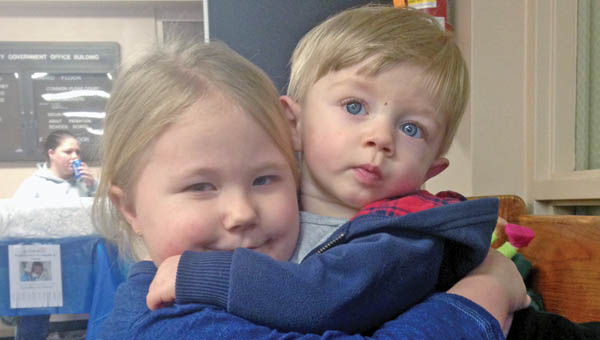 Nine-month-old Dawson Mahaney gets a hug from his cousin, Emily Mowery.

That’s because he was born with, in addition to the four holes in his heart, supraventricular tachycardia (SVT).

SVT causes the heart’s electrical system to malfunction, which increases heart rate for reasons other than exercise or stress.

“He was a week old when we found out,” Kristen Mowery, Dawson’s mother, said. “He was rushed to the hospital and put on life support.”

Dawson was in the hospital for two and a half weeks.

Since then, he’s been in and out of the hospital. He’s had two surgeries to correct hernias and a condition called pyloric stenosis, which was preventing him from digesting his formula properly. And Dawson also makes almost weekly trips to Cincinnati Children’s Hospital Medical Center.

Dawson gets weighed frequently to see when he will be big enough to have surgery on his heart.

But overall, Dawson seems to be a happy child, Kristen and her sister, Courtney Mowery, said.

“One day he could be like this,” Kristen said, gesturing to Dawson, “but tonight he could be sick and in the hospital again.”

The League of Competitive Outdoorsmen (LOCO) organized the bake sale to help raise money to curb the costs of Dawson’s frequent trips to Cincinnati and medications.

Micah Gue, member of LOCO, said she has known the Mowery family for many years and learned about Dawson’s medical issues via Facebook.

“I’ve known those girls since they were kids,” Gue said. “I used to help babysit them.”

That’s how LOCO got involved with helping raise funds for Dawson and the group isn’t stopping with one bake sale, which raised $222 on Wednesday.

Gue said LOCO is selling T-shirts for Dawson’s cause, and they have already sold 35. Kristen and Courtney said there are plans to hold another bake sale, possibly at the Ashland Walmart, but the date is not set. They also hope to get a local restaurant involved for a special day when a portion of that day’s sales would go toward the fund.