For a Statehouse giant: New bridge to be named for Lawrence legislator 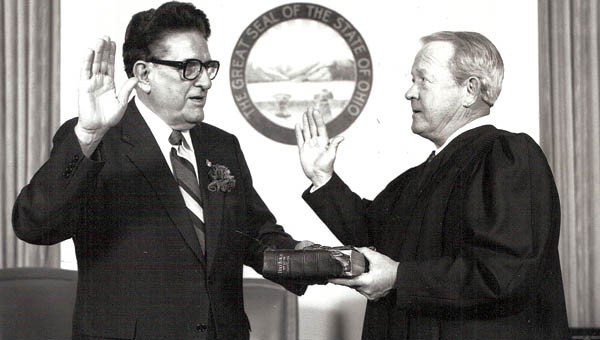 Honoring one of Ohio’s longest-serving legislators was the impetus for naming the new Ironton-Russell Bridge for the late Sen. Oakley Collins.

Recently Gov. John Kasich signed into law the bill sponsored by Rep. Terry Johnson, R-90, following a series of hearings where supporters of the measure spoke before the committee on naming about a year ago.

“I was extremely pleased to see the state recognize Senator Collins’ accomplishments,” Lawrence County Common Pleas Judge Charles Cooper said. “I actually worked as a Senate page for him in college and one year in law school. I got to watch him in action. It was marvelous to see someone who could work both sides of the aisle and get things done for southern Ohio.”

Collins, who was born in 1916, served from 1946-1986 either in the House or Senate. Among his achievements, Collins pushed for legislation that created the state’s vocational school system, sponsored legislation lowering the majority age from 21 to 18 and sponsored legislation placing fluoride in the water. The senator died in 1994.

“He funneled millions of dollars here as chairman of the education committee,” Ironton Municipal Court Judge O. Clark Collins, Jr. older son of the senator, said. “He just always believed in education. He always stressed to me and my brother to get a good quality education. He wanted children here to have the same opportunities. You could see it around the county with improved school buildings.”

“He masterminded the equity that was brought to rural schools and every issue in rural Ohio,” Dingus said. “He worked to move southern Ohio forward, to help bring equity in teachers’ salaries. He was a strong partner to help with Ohio University Southern.”

Clark Collins remembers his father as a man dedicated to his work for his home county and believed in the personal touch.

“He was probably the hardest worker I ever knew,” Collins said. “He would put thousands of miles on a car in a year. He felt it was important to get out and see his constituents.”

Anywhere he met a Lawrence Countian in need, he would take out his notebook and jot down the particulars. Then back in his office he had two secretaries who would work to help those in need.

“He was always the first in the office and the last one to leave,” Collins said. “He would take those last hours and he would call back into the district and return those calls until 11 at night. That is just how dedicated he was.”

“He would help anyone,” Dutey said. “It didn’t make any difference on the party. He was political, but wasn’t if someone would ask a favor of him. He did a lot for southern Ohio and Lawrence County. It is more than fitting that the bridge be named after him.”

Employees from Brayman Construction Corp. remove planks from underneath finished bridge construction on Tuesday in Ironton. Maybe this time next... read more