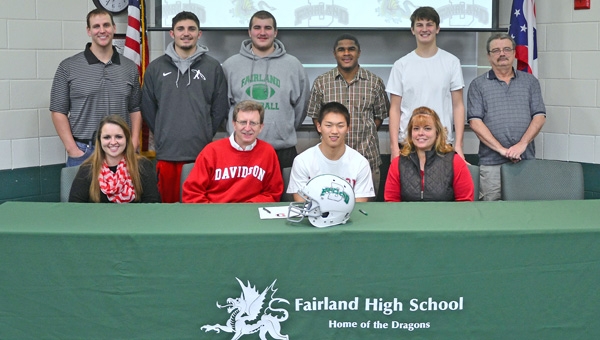 PROCTORVILLE — Nathan Campbell is going to play college football, as long as it doesn’t get in the way of his academics.

“Academics and football. That’s why I’m going there. (Davidson) takes their academics very serious and that’s important,” said the Fairland Dragons’ senior after signing a national letter of intent with Davidson College on Wednesday.

Campbell has a 4.1 grade point average on a 4.0 scale. He was named to the Ohio High School Football Coaches Association’s All-Ohio Academic team.

Now, don’t think that Campbell is putting football down on the priority list. In fact, playing college football has been his goal.

“All my life I wanted to play college football, especially when I got to high school I started to consider it,” said Campbell.

The 5-foot-9, 185-pound Fairland Dragons’ senior all-purpose standout was a first team Division V All-District and All-Ohio special mention selection. He also played defensive back, a position that appears to be his best chance to play for the Wildcats.

“(Davidson’s coaches) said they needed some more defensive backs. That’s where I can help the quickest,” said Campbell.

Campbell’s dream of playing at the next level was in doubt early in the season. He suffered an elbow injury in the season opener at Johnson Central, Ky., and didn’t return until the fifth game.

“At first it worried me. I felt l might not play again. I recovered, got back in, started making plays and everything worked out,” said Campbell.

Davidson was 1-11 last season and 0-8 in the league. However, Campbell said the program was moving in a positive direction.

“The football program is in a developing process,” said Campbell.

Campbell excelled offensively as a running back but mainly as a receiver. His junior season numbers led to a highlight tape that impressed the Davidson coaching staff.

Davidson is a Football Championship Subdivision (FCS) program that plays in the Pioneer Football League.

The 11-team league consists of Dayton, Morehead State, San Diego, Drake, Campbell, Marist, Butler, Valparaiso, Jacksonville and Stetson. All of the schools are private colleges except Morehead State. The league is eligible to play in the FCS playoffs.

Davidson has an enrollment of 1,700 and is considered one of the top 20 colleges in the country.

Nathan — who plans to major in engineering — is the son of Kenda and Jon Campbell of Proctorville.