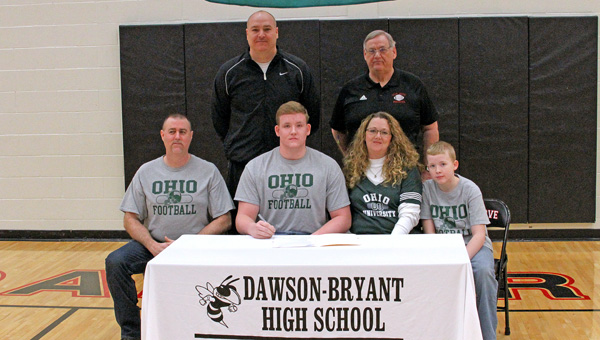 COAL GROVE — Austen Pleasants is a man of his word.

Pleasants gave Ohio University a verbal commitment in July that he would join their football team and he made it official on Wednesday by signing a national letter of intent with the Bobcats.

Pleasants was a three-time Division VI all-district, All-Ohio and All-Ohio Valley Conference selection. A four-year letterman, the 6-foot-7, 295-pound Pleasants has made an impact each season.

“He’s a deserving player,” said Hornets’ head coach Dave Lucas. “We recognized his ability early and conveyed that message with him. He took it serious. He did what the coaches asked and a little bit more.”

Lucas said Pleasants’ maturity as a player was easy to chart.

“He’s progressed constantly. As a sophomore, we asked him why he wasn’t knocking those guys down and now we have to tell him to stop. You don’t get many like him every day,” said Lucas.

Although Pleasants played both offense and defense for the Hornets, he said Ohio plans to utilize him on offense. Pleasants said he will get every opportunity to play.

“They said I would have the opportunity to compete and to be able to contribute,” said Pleasants.

“If I’m not where I need to be, then they’ll red-shirt. But they said I’d have the opportunity when I come in.”

He knows that regardless of the school, it won’t be easy.

The Bobcats had a streak of five straight bowl appearances snapped this season as they went 6-6 under head coach Frank Solich.

Ohio played Northern Illinois for the Mid-American Conference championship in 2011 when they lost 23-20.

“Coach Solich and his staff have done a great job at Ohio. It will be a great opportunity for Austen to continue to grow and develop as a player,” said assistant coach Jay Lucas.

Pleasants is also excited for the opportunity to play for the veteran head coach.

“I’m excited to go up there and play for him. Solich has done a great job,” said Pleasants. “I feel in real good about my decision. They brought in a new line coach this year Dave Johnson who has been at Georgia. I really liked him and I’ve got to know him real well.”

Austen — who plans to major in exercise physiology — is the son of Michael Wilburn and Jennifer Pleasants of Coal Grove.