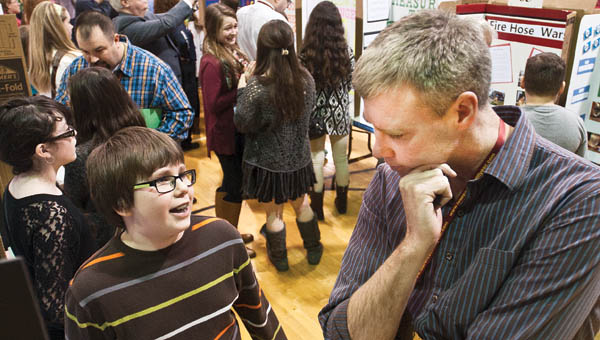 “I did this project because I was scared of roller coasters,” he said. “I figured if I learned about how they worked, I wouldn’t be anymore.”

Davis took foam pipe insulation for the track and marbles for roller coaster. Then he did what all good scientists do. He experimented over and over.

“Depending on the rise, which is the top of the hill, and the run, which is the distance of the loop from the start of the track, is what makes the roller coasters work,” he said. “If the rise was high enough and the run was short enough, it would be able to loop the loop in a successful trial.”

“I think from the kid’s perspective, it’s a very important action because it’s not always done in the classroom. It’s more of an extracurricular,” Julie Walters, director of the county educational services, said. “The projects are mostly done at home and the kids have to be self-motivated to get this done.”

This year’s science fair featured 148 projects from all of the Lawrence County school districts except for Symmes Valley.

Autumn New, an eighth grader at Ironton Middle School, did her experiment on how much carbonation her favorite drinks produced.

“I used orange juice, Pepsi, sweet tea and Capri-Sun,” she said. “I figured Pepsi would have the most because it has the most acids in it.”

New took four plastic bottles and poured each drink into them. She then added vinegar to represent stomach acid and set the bottles on a 98-degree heating pad to represent the temperature of the stomach.

“I launched them with different angles using a protractor,” South Point Middle School sixth grader Sean Hackney said “I did each test with one, two and three rubber bands. There were a total of 90 trials. I enjoyed doing this experiment and learning about kinetic energy.”

Hackney’s project took about a week to collect the data.

A total of 50 judges from throughout the area judged the students’ projects.

“I think for a lot of the kids, it’s good for their self-esteem and good for camaraderie,” Ed Kittinger, psychologist at Rock Hill and science fair judge, said. “I enjoy doing this and I’m always positive with them.”

The cost of moving the county jail to Franklin Furnace goes up and up. A recent meeting between Lawrence County... read more