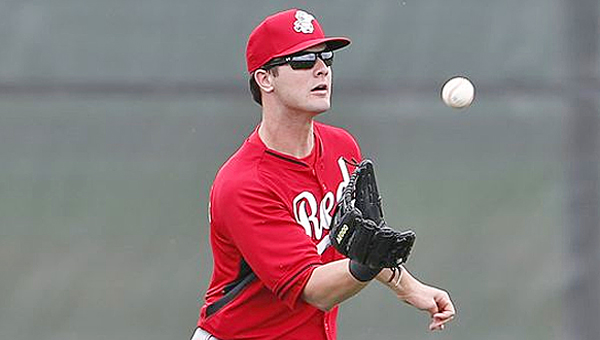 MCT Direct Photo
Cincinnati Reds’ minor league prospect Jesse Winkler is not on the 40-man spring roster but is considered the organization’s No. 2 prospect.

A farm is for growing, whether it’s food, livestock, animal feed or ball players.

Well, the kind of farm for growing ball players is a farm system with minor league teams attempting to develop talent for the major league club.

Small market teams survive on a strong farm system since they do not have the money of the major markets such as New York, Chicago and Los Angeles.

The Cincinnati Reds are a small market franchise and the Reds have always produced their best talent via the farm system.

With the threat of some stars taking the free agent route along with the need to fill a few glaring holes, there are some players in the Reds’ farm system who are getting close to being ready to join “The Show.”

The two top prospects in the Reds’ organization just happen to be players who can fill two critical positions.

Johnny Cueto is the Reds’ pitching ace and he can become a free agent after the 2015 season. Cueto — who won 20 games last season — will command a large contract on the free agent market.

Waiting in the wings is the Reds’ No. 1 prospect who also happens to be a right-handed starting pitcher. Robert Stephenson is a 21-year-old power pitcher who throws in the 99-mile an hour range.

Considered the No. 24 prospect among all minor league players, Stephenson struggled somewhat with his control last season when he jumped to the Class AA level.

With a good curveball and adequate change-up, Stephenson could be major league-ready by next season.

The Reds have been searching for someone to fill the void in left field for years. Ryan Ludwick did well for a season, but an injury two years ago kept him out of the lineup almost the entire season and he was non-productive last year.

The Reds acquired Marlon Byrd from the Philadelphia Phillies in the off-season to play left field, but Bryd is pushing 38 and — despite a good season last year — has been with nine different teams which isn’t a good sign.

Enter No. 2 prospect Jesse Winkler, a left-handed hitting outfielder who is rated the No. 26 prospect in all of the minor leagues.

Also 21, Winkler has climbed through the farm system exhibiting the ability to hit not only for a .300-plus average but he also hits with power. An unlike Reds’ right-fielder Jay Bruce, Winkler doesn’t have a penchant for striking out.

He was injured last season in a July auto accident and missed the rest of the season with a sprained ligament in his right wrist. He played in the Arizona Fall League and led the league in hitting.

Two other pitchers are in the Reds’ possible near-future plans. Nick Howard was the top pick last year out of college and got some work at the Dayton Class A level. Michael Lorenzen is a power pitcher much like Stephenson with a fastball in the high 90s who can be a starter or a closer.

Lorenzen is the Reds No. 3 prospect and Howard No. 4.

The Reds’ top pick in 2012 was Nick Travieso and the right-hander is another power arm who pitched in Dayton last season. He will be in the Reds’ camp as a non-roster invite along with Howard.

Pitchers and catchers report to spring training on Thursday with the rest of the squad scheduled to report on Tuesday.

Pettine believes Manziel will be better after rehab