Cueto hoping for new contract before start of season 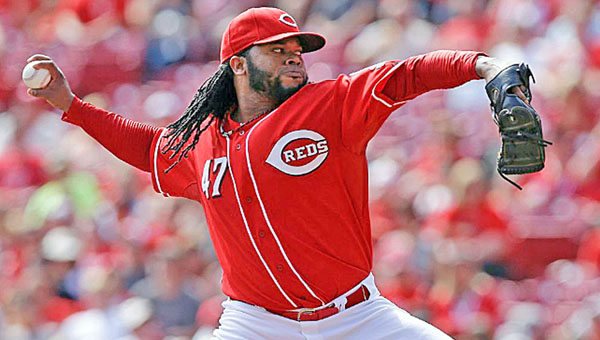 Cincinnati Reds’ 20-game winner Johnny Cueto is hoping to get a new contract before the start of the season. (Courtesy of the Cincinnati Reds.com)

GOODYEAR, Ariz. (AP) — Johnny Cueto would like to have a new contract before opening day.

The 20-game winner knows the Cincinnati Reds might not want to pay him the going rate for a No. 1 starter, leaving his status in doubt as camp opens. Cueto is in the final year of his contract, making $10 million. If the sides don’t reach an agreement, Cueto could be traded at midseason or leave as a free agent afterward.

The sides have talked about an extension, but nothing is imminent.

“I want to stay here,” Cueto said Thursday with trainer Tomas Vera interpreting. “Honest, I’d like to have a contract before spring training ends. But all I can do is play. At this point, I just have to keep working hard and let them work it out.”

The Reds cleared some room on their payroll by trading starters Mat Latos and Alfredo Simon in the offseason. Last February, the Reds gave starter Homer Bailey a six-year, $105 million deal. Cueto can expect an even bigger deal.

“He knows we appreciate him and want him to be here long-term,” manager Bryan Price said on Thursday, before the Reds held their first workout for pitchers and catchers. “He has earned the right to be one of the top-tier-paid pitchers.”

Cueto went 20-9 last season, getting his 20th win on the final day. His RBI single set up a 4-1 victory over Pittsburgh at Great American Ball Park and provided the Reds’ best moment in an otherwise disappointing season. Cueto became the first Reds pitcher to win 20 games since Danny Jackson in 1988 and the first Reds right-hander since Sammy Ellis and Jim Maloney did it in 1965.

“To be an ace, you need to have the overall ability to impact the team,” Price said. “He has to be the guy that consistently gets you to the back of the bullpen. When he pitches, you never feel like you’re at a disadvantage. In the second half of the season, when we hit the skids, he was still outstanding. It was as well-pitched of a season as I’ve ever seen.”

“Good for him,” Cueto said, when asked about Scherzer’s contract. “I don’t know what will happen with me. I can’t tell you.”

NOTES: Bailey isn’t throwing off the mound yet. He’s recovering from surgery last September to repair a ligament tear in his pitching elbow. … Left-handed reliever Sean Marshall is still recovering from shoulder surgery last June 24 and isn’t ready to pitch. Marshall made 15 appearances last season before having surgery. He’s 5-6 with a 3.27 ERA in 104 relief appearances during three seasons with Cincinnati.

Jim Walker jim.walker@irontontribune.com   PEDRO — The third time proved to be the charm. After losing to Coal Grove twice... read more