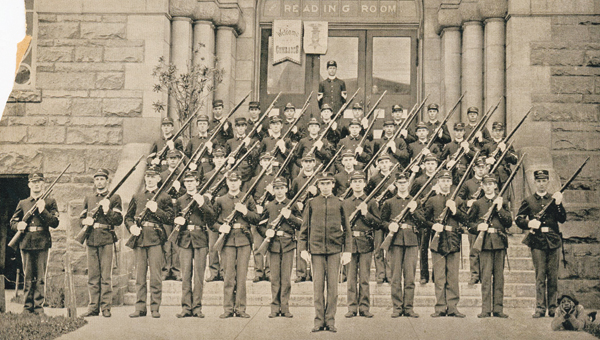 A Lawrence County native has added her special contribution to the upcoming county’s bicentennial celebration.

Last week Jan Little, who grew up in Coal Grove, donated two shopping bags worth of vintage photos that her in-laws, Ebert and Marjorie Little, collected over the decades.

“Since my inlaws passed away, I was going through all this and thought I would donate to the bicentennial,” said Little, who now lives in Columbus.”

Among the finds is a group photograph of pig iron workers that includes the founder of Ironton, John Campbell; the original entrance to Woodland Cemetery; and group shot of the Grand Army of the Republic standing in front of Memorial Hall.

“We will have these displayed at some point,” said commissioner Bill Pratt, who is heading up the bicentennial committee. “In months like January and February when we can’t have outside events we will have inside displays. Once we dedicate the new building we will be able to display things like this there.”

The goal of the committee is to recreate the original courthouse that stood in Burlington. That building is expected to be used as a community center for the eastern end of the county.

And there may be more contributions from Little, whose husband, Alan, grew up in Ironton.

“I have more I want to make prints of,” she said. I have one of the train depot when it was being built with men sitting on top of the roof. I have a picture of what used to be called Hairpin Curve.”

Service restored after weekend pump outage   SCOTTOWN — A pump outage that left about 800 customers without water in... read more