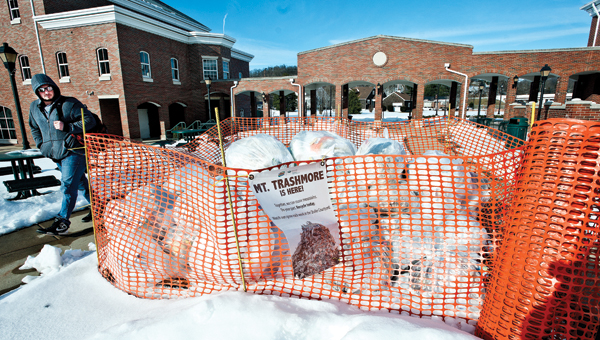 The ever-growing pile of white bags in the Shafer Courtyard at Ohio University Southern-Ironton Campus is not because someone refused to take out the trash.

Rather, Mt. Trashmore is there to make students and the community aware that recycling is more than just a fad.

“This is the garbage we generate on campus,” Adam Riehl, director of facilities, said. “It is an illustration of the amount of waste produced on campus for a certain period.”

The waste comes from all the trash receptacles on campus, including items that could be recycled, that was collected over the past two weeks.

“It was the idea one of our students had last year researching to cause awareness on campus,” Riehl said. “And it did gain a lot of awareness. We were pleased with the results and wanted to try to do it again.”

Mt. Trashmore ends today but campus organizers are hoping its impact will last much longer and is part of the 10-week Recycle Mania that started the first week of the month.

“We have students patrolling the campus watching for people recycling,” Riehl said. “They are caught green-handed and they get a reusable mug and we take their picture and put it in the campus news.”

The more artistically inclined are trying to create sculptures made out of recyclables and departments on campus are in a recycling contest for who can recycle the most.

“It is mainly going to be bragging rights,” he said.

Keeping the status quo as far as the Burlington Commons park is what at least two of the county commissioners... read more