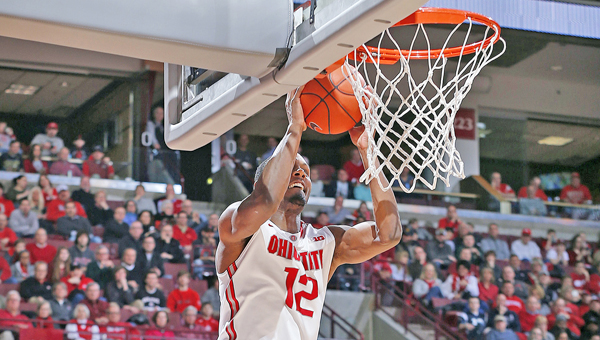 COLUMBUS (AP) — D’Angelo Russell may be playing some of his final college games. If that’s the case, he’s going out in style.

“I could get used to this,” the acclaimed freshman said with a grin after Ohio State fought back from a 12-point deficit to edge Purdue 65-61 on Sunday night.

Russell scored 28 points and Shannon Scott hit three free throws in the final 24 seconds as the Buckeyes (21-8, 10-6 Big Ten) kept alive their chances of a high seed in the conference tournament.

“This is the type of win that we have to get,” Thompson said of his team’s biggest rally of the year. “It’s too late for us to be taking steps backward now. It’s our time to really hit our stride and really get going and put together a run.”

The Buckeyes took their first lead in almost 20 minutes when Russell hit an 18-foot jumper behind a high pick with 7:28 left

After falling behind by as many as four points, the Boilermakers regained the lead when Rapheal Davis poured in a 3 of his 15 points from the top of the key with 2:54 left.

The teams traded points until a Basil Smotherman miss was rebounded by Thompson. Coming out of a timeout, Russell beat Davis off the dribble to bank in a layup with 59 seconds left for a 60-59 Ohio State advantage.

“I just made a move in the air and it went in,” said Russell, considered by pro scouts to be a top-five draft pick if he gives up his final three years of eligibility to turn pro.

With 29 seconds left, late in the shot clock, Jon Octeus drove and his shot was blocked by Amir Williams. Scott was fouled on the rebound and hit the first of two for a 61-59 lead with 23 seconds left.

Purdue hustled the ball down the floor and called timeout. Davis missed a layup with Scott rebounding and drawing the foul. He hit both free throws to push the lead to 63-59.

“We had some good looks at the basket, we just didn’t convert,” coach Matt Painter said. “For us, it was that 10-minute stretch of the second half when we did good things and we missed layups and we missed free throws. If we could convert some of those and take care of business, those last 2 or 3 minutes wouldn’t have been the difference.”

Ohio State coach Thad Matta, now 13-0 in March at home with the Buckeyes, said the comeback win couldn’t have come at a better time.

“You’ve got to find ways to win basketball games,” he said. “We kind of chipped away and chipped away. It was a great win.”

QUOTE OF THE NIGHT

Buckeyes coach Thad Matta on his team’s play when trailing and then down the stretch, “The biggest thing was we didn’t panic.”

Purdue: For all its glorious tradition, Purdue has frequently had trouble with Ohio State. The Buckeyes are the only Big Ten team which has a winning record against the Boilermakers — 88-84 — although when games vacated by the NCAA are counted, Purdue still has the upper hand, 84-82.

The Boilermakers won the earlier meeting 60-58 at home, ending a six-game losing streak to the Buckeyes. They had not swept a season series against Ohio State since 1998.

Ohio State: The Buckeyes moved into a three-way tie for fourth at 10-6 with Michigan State and Iowa in Big Ten play. The top four teams, after tiebreakers, get a double-bye. That would allow a team to sit out the first two days of the five-day event at United Center in Chicago March 11-15.

Both Michigan State and Iowa would win any tiebreaker with Ohio State.

Purdue: The Boilermakers close out the regular season with games at Michigan State on Wednesday and home against Illinois on Saturday.

Ohio State: The Buckeyes play at Penn State on Wednesday and then host No. 5 Wisconsin on Sunday in their final scheduled game.

Jim Walker jim.walker@irontontribune.com   WILLOW WOOD — The Black Eyed Peas aren’t the only ones who want to “Get It... read more