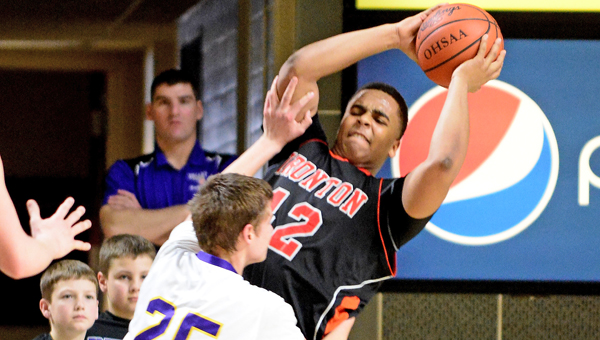 Bowling took two pieces of advice from LaFon and converted them into pivotal plays as the Ironton Fighting Tigers upset the top-seeded Lucasville Valley Indians 48-39 on Sunday in the Division III district semifinals at Ohio University.

“The biggest thing is they responded very well. The thing they stuck to is something you can control and that is defense. You can play physical defense and they did that in the first half,” said LaFon.

“Then they got in the locker room at the half and they started to realize they were OK. They were on a regular basketball court and they played pretty good ball in the second half. (Valley) is a very legitimate team. They were the number one seed and they were here last year and went all the way to the regionals.”

Bowling made his two key plays in the fourth quarter that turned the game.

Two foul shots by Tristan Cox and two by Phillip Kratzenberg put Ironton up 30-26 to begin the fourth quarter.

Ironton missed a shot and Valley got the rebound, but Bowling grabbed the ball away and scored.

“Coach told us they were being loose with the ball. I saw him bring it down so I came in and took it. He was being weak with it so I put it up,” said Bowling.

After a short jumper by the Indians’ Bryan Rolfe, Bowling hit a twisting 10-footer for a 34-28 lead.

“Number 12 (Blake Howard) already had three fouls, so the coaches told me to attack him and I went at him trying to draw a foul and I was able to hit the shot,” said Bowling.

Aaron Linne hit a 3-pointer for Valley, but a layup by Dylan Malone and two free throws by Bowling put the lead at 38-31 with 3:09 left.

Two free throws by Malone and one by Kratzenberg opened up a 41-33 lead and a layup by Bowling with 1:10 to go off a pass from Kratzenberg and it was 45-35.

“Some things (Bowling) is doing down the stretch don’t show up in the statistics because he’s guarding the best guy and he’s playing excellent defense,” said LaFon. “If he plays well 15 (feet) and in, we’re a good team.”

Defenses took charge in the first quarter as each team had five turnovers and Ironton shot just 3-of-15 from the field.

Cox hit a driving layup four seconds into the game and with 47 seconds left and it was 6-6 at the end of the quarter.

Bowling put Ironton up to begin the second quarter and Blake Howard it a 3-pointer for Valley as the lead changed hands six times.

Cox hit a short jumper from the middle of the lane with 51 seconds left in the half and Ironton was down 15-14 at the break.

Ironton was 6-of-26 from the field in the first half and Valley 5-of-19 as both teams played physical defense.

“The game was physical and both teams being physical like they are. Every time we went in for a layup — and the same for them — it was contested hard. It made it hard to go to the basket,” said LaFon.

Bowling’s 5-footer and a layup by Desmond Young put Ironton ahead 18-15 to begin the second half.

A three-point play by Rolf with five seconds left in the quarter tied the game heading into the decisive fourth quarter.

Malone had a double-double with 10 points and 12 rebounds. Young had 11 rebounds as Ironton held a 44-25 advantage including 14 offensive boards to nine for Valley.

“It was a tremendous win for our kids. When they walked off the court you could just see how proud they were from where they started to where they are today. And you know what, they deserve to be proud of that,” said LaFon.

Rolfe had 12 points and five rebounds for the Indians (18-6). Romanello had seven rebounds.

Ironton will play in the district finals at 6 p.m. Saturday at Ohio University against Wheelersburg, a 44-38 winner over Waverly.